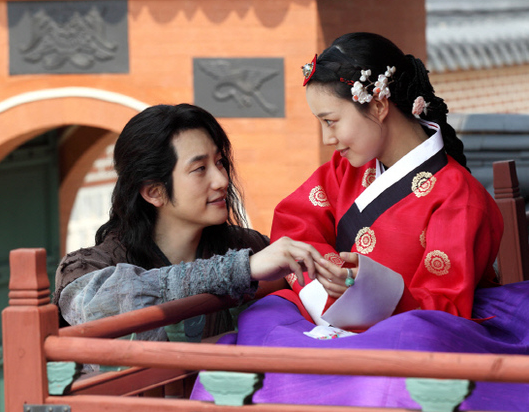 Lately, Moon Chae Won and Park Shi Hoo have been capturing the love and attention of fans everywhere for “The Princess’ Man“. The two actors, who seem very comfortable with each other, have filmed multiple heart wrenching scenes together. Using their hands, they tell a story that can only be so poignantly told with body language.

After the Kye Yoo Jung Riot, the two lovers’ hand contact received more attention. Seung Yoo (Park Shi Hoo), who can’t hide his love for Sae Ryoung (Moon Chae Won), and Sae Ryoung, who wants to protect Seung Yoo from further pain, create a series of romantic episodes. There’s even one scene where he wraps his hands aroundher waist to act as a human safety belt of sorts.

With just one touch of someone’s hand, the audience swoons.

On the episode that aired on September 15, Sae Ryung, who is heartbroken at seeing Seung Yoo so emotionally pained, gives him a sweet hug from the back. For a second, the two bask in the sweet embrace of their romance.

And then Seung Yoo coldly wrenches her hands free with tears in his eyes.

Who knew hands could convey such deep emotion?

When Sae Ryung frees herself after being trapped in her house by her parents, she sees Seung Yoo’s shadow in the light. With an outstretched arm, she reaches for the shadow with her delicate fingers.

Sigh. These two are so pitiful.

What will happen to their love next? Stay tuned, the next episode is coming out on September 21!

Moon Chae Won
Park Shi Hoo
The Princess' Man
How does this article make you feel?