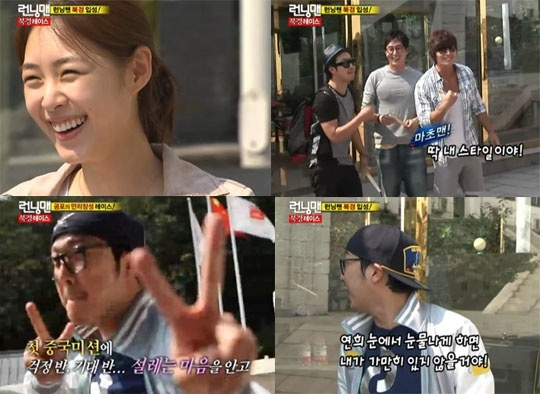 “1 Night, 2 Days” showed a rise in viewership ratings this past weekend, perhaps signaling the end to the “Kang Ho Dong Shock.” “Running Man” also received much love for its Beijing Special.

The episode showcased the special stages that “1 Night, 2 Days” cast had prepared for their viewers, featuring a duet by Lee Seung Gi and Sung Si Kyung, and a special surprise appearance by the idol group, BEAST.

The guests of “Running Man” were actor Kim Joo Hyuk, actress Lee Yeon Hee, and Kara’s Ji Young, who came in place of Song Ji Hyo. Audiences were treated to the spectacular sight of a race through Beijing, China and along the Great Wall. You could also see many Chinese fans follow the cast members with signs and cameras, affirming “Running Man’s” popularity abroad.

“Running Man” recorded a 16.2% viewership rating, placing first in its time slot. It was a rise of nearly 3% from the previous week’s. Its competition, “A Man’s Privilege,” recorded 12.5%.

The episode of “1 Night, 2 Days” drew attention as it might last episode featuring Kang Ho Dong. It is unsure as of yet whether Kang Ho Dong will come out to record a “farewell” episode for the variety show.