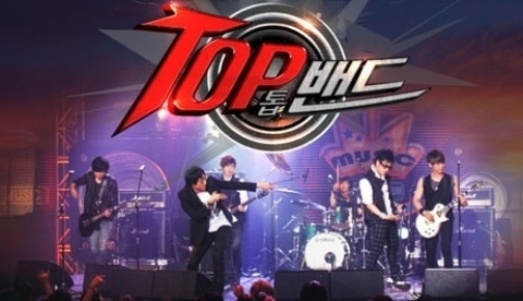 From the very beginning, there was concern over whether KBS reality show “Top Band” would be a success and there were a number of factors working against them. The judges on the show, many of whom are regarded as legends in the history of Korean rock, are all figures who belong to a genre that is far removed from the mainstream consciousness and generally disregarded by the public. It is aired at a time when their competitors are airing dramas, Saturday night at ten. It doesn’t make use of the “devil’s editing” that other audition programs seem to use without abandon. Nor is it shot like a variety program. All it shows is a bunch of talented bands tirelessly working towards winning the competition.

And if one simply looks at the ratings, “Top Band,” which rakes in paltry TV ratings of 4-5%, can be classified as a failure. But the number of stories and topics it generates is on par with the dramas that are aired at the same time. Netizens who support the show, these “Top Band Maniacs,” show their love every day on the official homepage and have even petitioned for a second season. And the reason a show like this has earned such fervent supporters is because of the depth of talent of its contestants. Some of them have already started making a name for themselves.

Broken Valentine was one of the favorites and although they failed to overcome Toxic and move onto the round of eight, they are a band that won first place at the Asian Beat Grand Prix Final in 2008. Sales for Gate Flowers’ album of the same name, released last year, have surged and Toxic, another heavy favorite, has already been approached from twenty different entertainment companies to sign with their labels.

The truth is that although these bands are all labeled as amateurs, any one of them would face no difficulty releasing an album immediately.

The honest editing of “Top Band” is also one of the reasons it has such a loyal following. The members of these bands, who came together with their love of music, struggle to produce the best music possible, regardless of the outcome, and the production team broadcasts it exactly as it plays out. They show the daily lives of the contestants preparing for their performances, their dilemmas regarding music, their heartwarming friendship and the support they have for each other; not only within the group, but for their fellow contestants as well.

Perhaps it is because viewers have grown tired of seeing so much drama on other audition programs, but in spite of the lack of sensational stories, the response to “Top Band” has been unexpectedly favorable. There is no “devil’s editing,” no tearjerkers from the contestants. They simply depict the troubles and tribulations these musicians face to become a better band and the results of their hard work. For these contestants, who have always been relegated to the fringe of the music scene and shunned by the mainstream audience, it is a unique and rare opportunity to change the misconceptions people hold about rock music or rock musicians and perhaps even bring about a long-needed change to the current music industry.

Top Band
Toxic
How does this article make you feel?