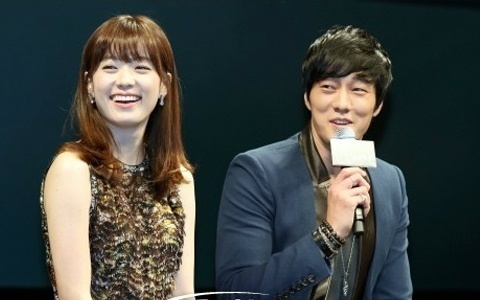 On the September 21 episode of SBS’ “One Night of TV Entertainment ,” So Ji Sub and Han Hyo Joo sat down for an interview for their film, “Only You,” showing off their friendship and chemistry on and off screen. Jokes and laughter were abundant in the short interview.

Han Hyo Joo revealed that she called So Ji Sub “ahjussi” (a term used for older males with a significant age difference) even though there was only a ten–year age gap between her and So Ji Sub. She explained that it was because her character called So’s character “ahjussi” and it just seemed weird to call him “oppa” (a term used for older males with less of a age difference).

The interviewer commented that it seemed like Han Hyo Joo had no “aegyo” (girlish charm). When asked if this bothered him, So Ji Sub responded that it was actually more comfortable for him to be called “ahjussi” but that Han Hyo Joo really didn’t have any girlish charm.

Han Hyo Joo countered, “No, I really do” and added that So Ji Sub tries to brighten up the atmosphere on the movie sets but he fails because he is just not funny. So Ji Sub reluctantly agreed.

The interviewer also conducted a compatibility quiz for the “So-Joo couple,” to which the results only showed thirty percent compatibility between the two, suggesting that they just remain good colleagues.

Maybe that’s for real life but on screen, it looks like their chemistry sizzles. Have you seen these photos? And here’s the trailer for their movie.

The interview ended with these final words from So Ji Sub: “It’s not that I like action movies. It’s too hard for me now so please send me romantic comedy scenarios. And Hyo Joo, let’s cultivate some girlish charm.”

Oh my, will we see So Ji Sub in an image-changing romantic comedy soon?

Han Hyo Joo
One Night of TV Entertainment
So Ji Sub
How does this article make you feel?