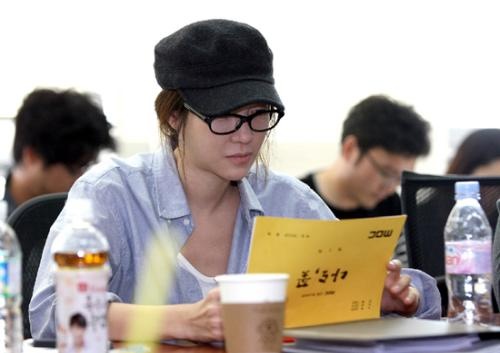 Lee Ji Ah Makes Her First Appearance in Six Months for Script Reading of ‘Me Too, Flower’

Lee Ji Ah made an appearance for the script reading of the upcoming Wednesday-Thursday MBC drama, “Me Too, Flower!” on the 26th at MBC’s Dream Center. This was her first public appearance in six months since the SBS drama, “Athena: Goddess of War,” ended.

She was in comfortable attire, wearing black horn-rimmed glasses and a hat over her short hair. But due to the stressful period she had recently gone through, she appeared somewhat gaunt and tired. When she passed the reporters in front of the building, she kept her head down without making any comments and made her way directly to the conference room where the reading was taking place.

On this day, Lee Ji Ah was joined by her fellow costars Kim Jae Won, who plays the male lead, and Han Go Eun.

When the reading was completed, Lee Ji Ah left immediately but seemed to be in better spirits than when she had arrived. Afterwards, PD Go Dong Sun met the reporters and said, “It was only the first time but the atmosphere was good. It seems that Lee Ji Ah is lacking a bit of strength, though.”

“Of course, this is only the beginning so she’ll probably gather her strength as time passes.”

Since her scandal with Seo Taiji, Lee Ji Ah has been confined to her home and has stayed away from all activities. However, it looks like she’s ready to make a comeback and face the public and has been garnering much interest for accepting the role in the new MBC drama.

‘Me Too, Flower!’ is set to make its premiere in early November.

Lee Ji Ah
Me Too, Flower
Seo Taiji
How does this article make you feel?