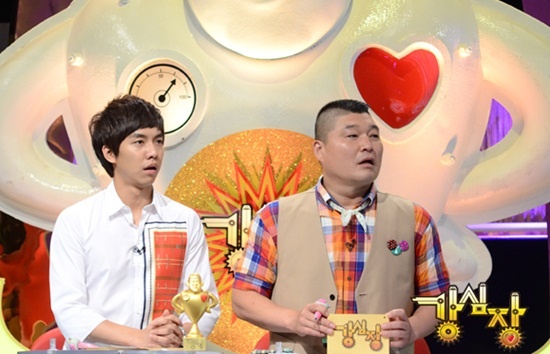 ★ The super group of guests begin their talk battle in earnest, aiming to get the 51st Talk Strong Heart★

▶ Sung Si Kyung, “Everyone becomes a top star if they kiss me?!”

The heavenly voice that always moves the heart! The ballad singer that represents our generation! Sung Si Kyung! Sung Si Kyung, He kissed top actresses several tens of times?! Appears in his music videos as a way of saving(?) production costs, There is always a deep kiss scene in these?! There is a bit of a special kiss in the music video for his song “I like” in his current album? The behind the scenes story about the widely discussed kiss scene as well!

The eternal teenage girl that always dreams about transformations! The cheerful and bright rock band! Jaurim’s Kim Yuna! Mother Kim Yuna, She got a slipped neck disc and even got virus related paralysis due to her son?! Even if he’s heavy it’s fine! Even if it’s tiring it’s fine! Kim Yuna’s extravagant love for her son! The music that Kim Yuna’s son enjoys listening to is Britpop?! The musical genius, Kim Yuna’s Son’s amazing talent!

▶ Kim Hae Sun, “The inspired acting that I did during my pregnancy was…”

She has another different playful charm to her compared to what she is like in Dramas! The original late teen star! Kim Hae Sun! Shocking Revelation! Kim Hae Sun’s inspired acting, in actuality she was pregnant?! The character actress Kim Hae Sun! During a drama recording, she shaved her hair off for the sake of the last scene?! She had no choice but to record her CF while wearing a wig, Kim Hae Sun’s brilliant acting spirit!

She is once again aiming for the top spot with her excellent martial arts skills! The lady with a double charm! Lee Yae Rin! Lee Yae Rin, My very special mother that was born in 1925?! Lee Yae Rin’s honest confession about her mother, who was a bit different compared to others! Spend the remaining years of her life more beautifully! Yae Rin heart-warming message to her mother!

The R&B Daddy? The R&B Cutie’s variety show talent bursts out!! The musician that is full of charm! Kim Jo Han Kim Jo Han, I am still a student that is on leave and hasn’t graduated?! Formed by gathering three of his church friends! The behind the scenes story about the birth of the group “Solid”, heard for the first time in 18 years! Grab the edge of this night, the word “Jamshil” in that song showed up for a reason! The identity of his cute and poor Korean skills is?!

The kid that is full of motivation and dreams of becoming the king of talking! Strong Heart’s “My Idol” Infinite’s Woo Hyun They have finally come 1st! The item that doubled the happiness for Infinite is….moving houses?! The absolute worst conditions in the history of idol housings! The tear inducing reality of Infinite’s Housing! The new housing that Infinite obtained with their tears and sweat will be revealed!

The gentle guy with a warm heart that is really suited to autumn! Byun Woo Min! They can move our hearts even though they can’t hear or see. He gathered up all the kids’ talent so that they shine, Byun Woo Min’s deep love! The melody of love made by Byun Woo Min and the Kids! The Full Story will be revealed!