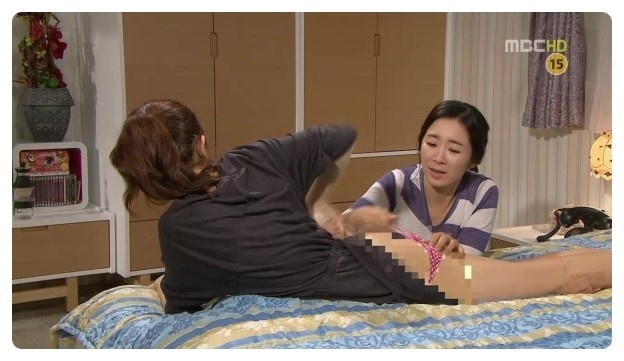 For the episode of MBC’s “High Kick 3: The Short Legs Strike Back” that was broadcast on September 27, Baek Jin Hee’s underwear and behind were exposed.

Although the production team of High Kick blurred her behind, the sitcom was broadcast during a time period when families watch the show, thus, viewers are currently criticizing the High Kick production team saying that it was inappropriate.

Baek Jin Hee is living in Yoon Kye Sang’s house and she was doing her business in the bathroom. Suddenly, Ahn Nae Sang was drilling a hole under the house and ends up drilling a bit of Baek Jin Hee’s behind making her bleed. The mother of the family Yoon Yoo Sun pulls up Baek Jin Hee’s dress and underwear in order to check her behind.

As you can see in the pictures, although her behind was blurred the scene is still very explicit. The High Kick production team stated that Baek Jin Hee was actually wearing something underneath, but the buzz and controversy does not appear to be decreasing.