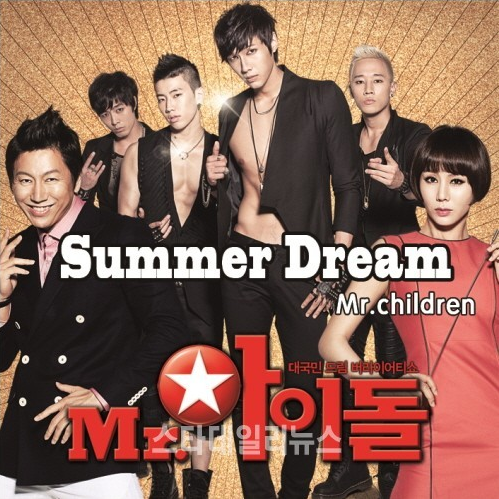 Releasing an OST almost a month before the movie opening is a rather unusual event. But “Summer Dream” is a good title song that has a light melody and lyrics that well-matches the mood of the movie.

“Summer Dream” is a remake of a song by the same name by a popular Japanese group, TUBE. But with it’s bright lyrics about dreams, challenges and hope and it’s light, dance rhythm, the song expresses the theme of the movie very well and anyone can sing along to it.

“Feel Your Dream, you and I, let’s go together. Even if it hurts sometimes, it’s alright, even if you fall, it’s alright- I am here.” “For the day of victory, I go toward my dream today- I will never give up, I will never stop. Even if I fall thousands of times, I am a warrior who will stand up again.” These lyrics well represent the theme of the movie, which is a “challenge toward your dreams” and the image and background of an idol group.

Director Ra Hee Chan speaks about his decision to remake TUBE’s song as Mr. Children’s debut song, “These days, many songs are geared more towards performance and they are not that easy to sing along. I wanted the music to have a melody that can be clearly heard and I coincidentally heard ‘Summer Dream’ and thought it was the exact fit for this movie.” On September 28, the music video for “Summer Dream” was released at a staff report meeting.

“Mr. Idol” will have more variety than “Super Star K” and more heart-pounding excitement than “Star Audition: The Great Birth” and will open in October.