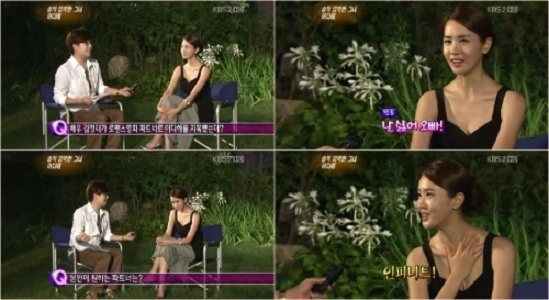 Aired on the evening of October 1, she said, “I’d like to have Infinite as my romance movie partners” in her interview with KBS “Entertainment Relay.”

On this day, she was interviewed on set for a photo shoot and revealed her current whereabouts, her secrets to maintaining her popularity in China, and how she also takes care of her skin.

And when mentioning about how actor Kim Jung Tae chose her as his desired romance movie partner, she replied, “I don’t like it,” causing the set to burst into laughter.

The interview continued by asking her of who she’d like for her partner and she replied truthfully, “I like Infinite” to reporter Kim Tae Jin.

Also on this day, Lee Dae Hae showed a different side than other actresses by continuously eating nonstop, an appetite that drew in the attention of others as well.

INFINITE
Lee Da Hae
How does this article make you feel?