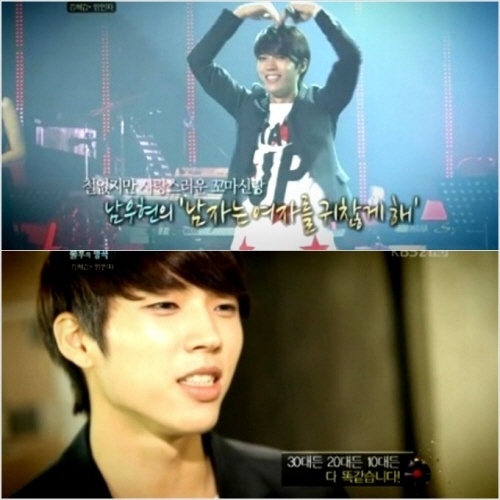 Woohyun of Infinite made his first appearance on KBS “Immortal Song 2” and captured the heart of women through his lovely image.

Aired on October 1, Infinite’s Woohyun covered senior artist Moon Joo Ran’s “Men Bother Women” after the first half of the composer special which consisted of legendary composers such as Kim Hee Kab and Yang In Ja.

Before singing, Nam Woohyun said, “I’m the youngest out of the artists and this is my first time singing with a band, so I’m very nervous” and “But I will win with my secret weapon which is shooting hearts. All women, whether in yours 10s, 20s, or 30, are all the same,” showing his confidence.

As soon as he stepped on stage, Woohyun said, “I’ll bother you all in singing the song “Men Bother Women” just this once” as he sang in a fun, rock version and showed off his hidden skills on his first performance. He even managed to show good performance manners mixed with aegyo to show off his charms.

And when his song ended, he whipped out with his secret weapon of ‘shooting hearts’ along with a lovely smile and earned a hot response despite the elder part of the crowd. He also earned the title of being a ‘refreshing youth.’

Despite his masculine and overflowing-charismatic image, he earned the adoration in this round of competition with the new lineup through his refreshing and overflowing-aegyo image. Ali, who is also a fellow competitor, said, “If there’s a man like that that bothered me, I’d be fine with it.”

Meanwhile, alongside appearing on “Immortal Song 2,” Nam Woohyun is currently promoting with Infinite in their newly released title song “Paradise” from the repackaged album that was released on September 26.

Nam Woohyun
INFINITE
Immortal Songs
How does this article make you feel?