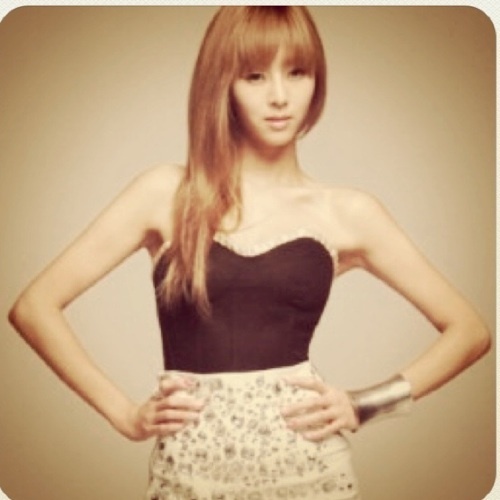 G.NA is the top ARENA girl!

The Cube Entertainment songstress is a popular singer, endorsement queen and much sought after model. The model world summoned her again this autumn! On October 3, G.NA tweeted four images from her latest style spread in ARENA magazine. She showcased her thin hourglass frame in a ballerina (or “Black Swan“) inspired mini dress. The frosted feathery bottom of the skirt really set off her beautiful “carrot top” hairdo. In the second set of images, the leopard printed heiress dress is a great contrast to the sexy cranberry after-five ensemble she model in the fourth image. What did she have to say about her fashionable photo shoot? Here is what she tweeted:

“wow..this is already out.. OCTOBER ISSUE for ARENA (magazine)…

Fans were in awe by her always stunning yet flawless appearance. They remarked “ unnie ur so… Wow!!! *jaw dropped* just drop dead gorgeous!!!” “Wow..You look so sexy and lovely,” and “you looks so great unnie.”

After joining her musical family overseas for the CUBE family concerts this year, she made her comeback with “Top Girl” this summer. G.NA is currently promoting her popular single “Top Girl” on weekly music shows.

Check out one of her recent performances on SBS Inkigayo here:

What do you think about her style spread for ARENA and which ensemble is your favorite?

Cube Entertainment
G.NA
How does this article make you feel?