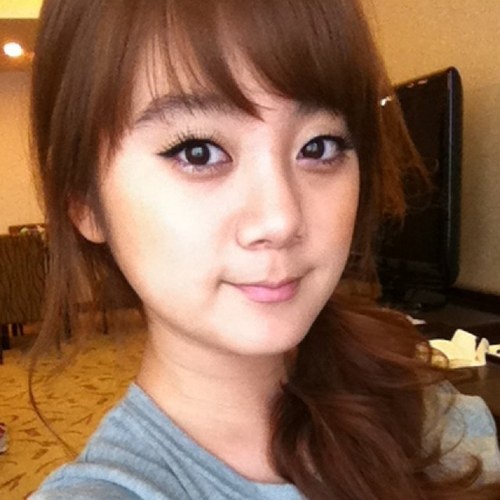 Do you want a glimpse of the “Wonder Girls at the Apollo” behind the scenes? Well, Soompi has you covered! The official yet unofficial photo from the set of their upcoming Nick movie has been released through one of the most trusted sources in insider information… Twitter! On October 3, member Woo Hye Lim tweeted an image of herself behind the scenes just for Wonderfuls! In the photo, she is seen crouching down (obviously in between scenes) looking at her cell phone.The singer shared the following message and image via the popular social networking website:

Wonderfuls complimented her, but some remained curious about the photographer behind the picture. They tweeted the following messages in response to her behind the scenes snapshot: “you look so cute!! hope you girls are having a good day of shooting! I’ll see you guys back on set tomorrow”, “You’re so beautiful Lim!! I miss you so much girls”, “Cute!^^ Who took the pic?.. I can’t wait for WG comeback! Hope the movie goes well!”

Below are a few of her additional tweets about life at the filming location in California:

“I can’t wait for our movie to come out! It’s gonna be fun! We are definitely having a good time shooting it! used to dream of going to different countries..and I’m still dreaming.”

“It’s 4am and we just finished our schedule for today. Tomorrow, we are gonna rest. Yay! Palm trees in L.A plus great weather..”

“Listening to Lighters by Bruno Mars(feat Eminem) on the radio!”

The Wonder Girls are currently filming their upcoming Nickelodeon movie “Wonder Girls at the Apollo” in Los Angeles, California. The movie, which is a Nick Cannon production (by his company NCredible), is scheduled to premiere in early 2012. This particular movie is made for Teen Nick.

The girls’ producer, Nick Cannon, is married to music superstar Mariah Carey. Do you think she will give the Wonder Girls music tips or possibly be a part of their next album?

Nick Cannon
Wonder Girls
How does this article make you feel?