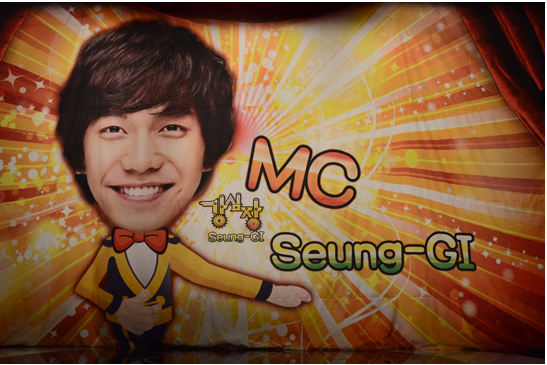 “The guy that makes your heart flutter” Lee Seung Gi! He will stimulate your heart even more intensely! He deals with the situation with his smooth charisma, brains and witty comments! The true nature of Lee Seung Gi’s MC style will be revealed! The scene of Lee Seung Gi’s first solo MC episode is full of nerves, shudders, tension and excitement!

★ The man to man talk battle! Unbelievable! ★
They will decide victory with the most surprising and intense stories that rocks the heart! The two people battle it out man to man with their story topics in this super talk battle!

▶ Round One, Hyun Jin Young VS Gary

Gary, “Do you actually know about Gary?”
Good at Hip Hop! Good on Variety Shows! The greatest guy that people want to possess lately, Gary! Trendsetter Gary! Can’t forget, actually the humiliating award ceremony story he wants to forget!? Even MC Shin Dong Yeob couldn’t figure out Leessang’s identity! What was the opportunity that caused them to soar up in popularity? Gary could have actually debuted as a member of H.O.T?! The truth behind this shocking affair revealed as well!

Yoo Hae Ri “The battle of the global sexy charismas”
The leader of sexy femme fatale acting! The actress that is full of character! Yoo Hae Ri! “Emma in Paris” Yoo Hae Ri! She got involved in an acting battle with the greatest movie sexy icon?! Yoo Hae Ri reveals the secret! The world renowned sexy star, Sylvia Kristel’s true nature! The sense of tension even reverberates throughout the recording set! Head into the vivid battle of spirits against the two sexy actresses!

Choi Ran, “My tearful method of fixing my husband’s drunk habits in one go!”
The lovely youth that is clearly cute! The top class actress! Choi Ran! Choi Ran’s shocking revelation! She ate sleeping pills as a way of fixing her husband’s habit after fighting with him?! They are the most renowned close couple in the celebrity world, what is the inner story behind the trifling fight that caused tears?

BEG Miryo, “Miryo pleas her case!” I really only got braces on my teeth~!”
They have transformed into female warriors, full of sexiness! Brown Eyed Girl’s Narsha, Miryo! Miryo has become visibly prettier! The truth behind the several suspicions that have risen due to her tooth braces!? Following on from Narsha’s plea, Miryo pleas her case! Miryo’s 3 stage transformation photo revealed!! As expected, Miryo is quite good at rapping! Miryo’s Hip Hop brother (?) Gary’s endless praises as well!

Lee Jae Yoon, “I used to be rising star in athletics that was personally taught by Ben Johnson!”
Dependable and full of entertainment sense! The warm hearted pure guy from “My Love By My Side”! Lee Jae Yoon Lee Jae Yoon, when I was young I used to be a rising star in athletics that was being watched around the world?! Lee Jae Yoon’s speed was personally taught to him by world renowned athletics star Ben Johnson! And he also proves this on the spot!! His entertainment sense is soo good that he need not envy anyone else! He is also quite superb at rapping! Dive into the charms of the multi-talented Lee Jae Yoon!

Kim Bo Mi, “The man chosen by Bo Mi is World Anchovy!
Surpasses the cuteness shown in “Sunny”! Has an overflowing amount of charm! Kim Bo Mi! Proven on Strong Heart! He ranks the lowest in looks within Super Junior, Eun Hyuk! However he is the man chosen by Kim Bo Mi?! Hey Bo Mi~ Accept my Love! The Strong Heart Style “Love Letter” is held impromptu! With her cute looks and voice, who will she end up picking?