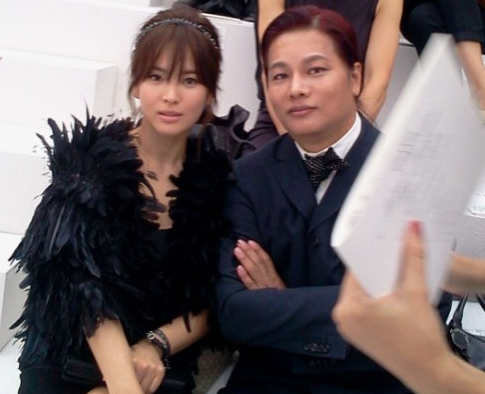 Actress and model Song Hye Gyo is currently in Paris, France. On October 4, she attended Chanel‘s S/S Collection Show, hosted at the Grand Palais. Crossing Korea’s borders into a foreign country, Song Hye Gyo once again demonstrated that she is a famous Hallyu (Korean Wave) star.

Famous stars, such as American actress and model Uma Thurman, British television presenter and model Alexa Chung and American musician, actor and director Jared Leto, attended as well. Celebrities from all over the globe were present, so it wasn’t a surprise that there was an immense amount of reporters and flashing cameras.

In particular, Jared Leto, Scarlett Johansson‘s ex-boyfriend, took an interest in Song Hye Gyo. One fashion critic who was present said, “Leto actually walked over to Song Hye Gyo and introduced himself. He told her his Korean nickname and started a conversation. Of course, since she is one of Korea’s greatest beauties, it’s not surprising that he was attracted to her.”

It would be hard not to notice Song Hye Gyo, who looked stunning in a black themed outfit. She paired a black mini dress with feathery jacket. Her makeup was kept to a minimum, with just enough to enhance her natural looks. A subtle brown smokey eye look accentuated her eyes, while natural nude colors defined her cheeks and lips. A black clutch and assorted bangles completed her look.

The star’s new movie, which is her first from a four year comeback, is titled “Today“, and is coming to the Korean big screen. Starting on October 6, Song Hye Gyo will attend the Pusan International Film Festival.