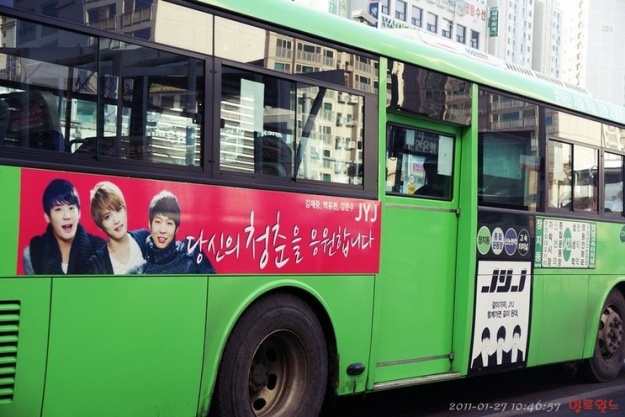 The Seoul Metropolitan Government (SMG) apologized to JYJ fans on its official Twitter on October 6, amidst protests and suspicion that a recent web banner used by the SMG is too similar to an earlier advertisement banner created by JYJ fans.

Image of SMG’s banner, from the Twitter of @crocus0904

The protests started on October 6 at 1:30 PM, when a JYJ fan tweeted that the SMG banner, which reads, “Seoul Supports Our Youth” (Seo-ul-i chungchoon-eul eung-won-ham-ni-da) bears a remarkable resemblance to an earlier ad banner created by JYJ fans, both in layout and slogan, which stated, “JYJ, We Support Your Youth” (Tang-shin-e chungchoon-eul eung-won-ham-ni-da).

With the onslaught of fan protests, SMG tweeted its denial of plagiarism at 2:30 PM on the same day. “The slogan ‘Seoul Supports Our Youth’ on our banner is a common expression that has been used since our earlier projects which has always aimed to realize dreams and hopes. The character font is also a handwriting font publicly shared on Naver. The campaign using this banner is not related to JYJ in any way. We sincerely apologize to JYJ fans for the misunderstandings caused. We respect the opinions of JYJ fans and will be replacing this banner.”

SMG also tweeted, “Yes, we agree that the JYJ banner was created through the tears of the fans. We are touched. We have confirmed that the banner was created through the request of the webpage design agency, and the designer in charge of the banner had totally no idea of the JYJ campaign. Because of the very strong similarities interpreted from the meanings of the slogan, once again we would like to resolve the misunderstandings and offer our sincere apologies.”

The tweet was also directly sent to @circus*****, @mad****, @JYJsPie**** , Twitter accounts of fans who first voiced their objections to SMG. Towards the apology, @mad**** tweeted, “SMG tweeted that they would replace the banner. It’s not my intention to make this a big matter. I hope this whole matter would end now…” On the other hand, @JYJsPie**** continued to argue, insisting, “Please show us more detailed examples of SMG using the banner earlier in the past.”

Reactions in the Twitter-sphere about this incident are mixed. @sunxiahine**** praised, “An efficient way to settle this matter,” while @pedd**** protested, “Without obtaining our approval, they illegally used (our) text, how can there be no relation (between the two banners) at all?! This is clearly an ad that was copied; it’s plagiarism!”

The JYJ banner was part of an advertising campaign organized by fans in support of JYJ when they sued SM Entertainment for unlawful contract practices. The campaign lasted one month from January 27, with banners appearing on 120 buses in Seoul and other major Korean cities (Gwangju, Daejeon, Daegu, and Busan), and reportedly cost 150 million won (~$127,000 USD), gathered from fan donations.

The Seoul Metropolitan Government’s denials of plagiarism and explanations to fan tweets at their official Twitter.

More photographs and bus route information of the JYJ ad campaign can be found at this blog.

JYJ
twitter
How does this article make you feel?