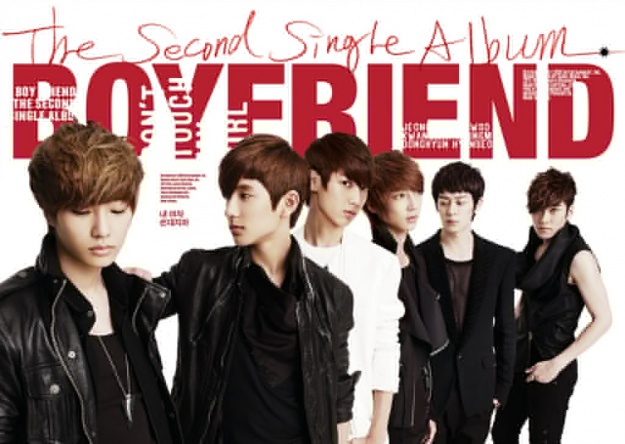 An act’s second release is always the most difficult period of their career, because they stand at a crossroad – to change their style, or to retain the sound they debuted with? A drastic change in sound can earn them new fans, but can also put off fans of their initial image, but retaining will result in the opposite.

But of course, the third, and usually the most difficult path to take, is the one in the middle – to build your own in the middle of the two extremes. And that’s what Boyfriend have done with their second single.

Boyfriend debuted with a rather juvenile sound – the vocals, the melody, the delivery, the choreography and the over-all concept played up their youth. The song was catchy enough and melodic enough, but was rather shallow – what you hear on the surface, such as the instruments, the synths, the drum lines and the melody, is all that it was.

Which brings us to “Don’t Touch My Girl“. The song has the same youthfulness that was evident on their debut single, but with that ever so slight pinch of maturity and depth. It’s a growth rather than a change, with equal amounts of familiarity and surprise packed in.

The song’s hook is a little more than repetitive “eh-eh-eh”‘s, and the presence of more instruments gives the song depth. You have these gorgeous string and piano sections going on, with electric guitars sprinkled here and there, and rather interesting synths throughout. Gorgeous melody that really fits all their vocals like a glove, which is extremely important, seeing as the rest of the song is already so well-done.

There is just the right amount of urgency to the way the verses were delivered, and just the right finesse and gentleness in the chorus to balance the entire song out. Whether this was intentional or not, the strings were also actually a very good way to tie both the finesse and urgency together.

One thing I’m a little iffy about though is the ending – it just ends. You have a (rather late) rap part, which actually reminds me of the rap part in SHINee’s “Replay” because it was put above the final chorus. When you have all these things going on though, especially with the addition of that guitar line which was haphazardly done as well, just cutting the song isn’t the best idea.

Over-all though, “Don’t Touch My Girl” is an easy, but fulfilling, listen. You don’t have to think about the elements running around all over the place to appreciate it, and the melody is relaxed enough to not give you a headache, but urgent enough to keep you listening.