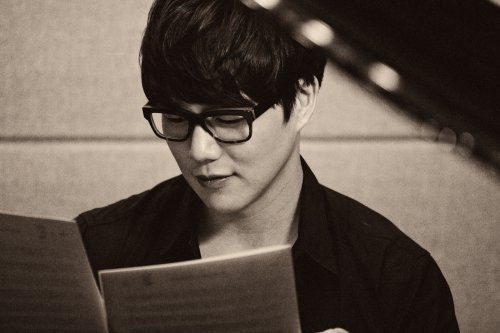 BIOGRAPHY
For this month, our featured artist is the male vocalist Sung Si Kyung. He is well-known for his warm and soft voice tone that matches perfectly with sweet love songs and his trademark glasses. Utilizing his soft and gentle image, he has been involved all over the showbiz industry, including some acting and variety show as well.

As an undergraduate student at the Department of Humanities of Korea University, he participated in a cyber song festival and won the grand prize. The winners of the song festival released a compilation album, from which Sung Si Kyung’s “The Road that Leads to Me” became a major hit. Thanks to popularity of the song the compilation album sold nearly 100 thousand copies, even though it was a promotional album. This really launched Sung Si Kyung to the top of stardom.

Many would say at the drop of a hat that his charm lies in his soft and laid-back image. Being tall with a favorable first impression, and being blessed with a soft and relaxing voice, Sung Si Kyung appeals to everyone. His fans range from the young and the old, men and women alike.

Officially though, Sung Si Kyung’s debut was in 2001 when he released his first album, “Like the First Time.” Mainly consisting of ballads, his debut album recorded three hits and made him the best rookie singer of the year. Participating as a guest singer on Yoo Hee Yeol of Toy’s album also contributed to his rising popularity. His second album released in 2002 was also a success, selling more than 650 thousand copies. He continued to release album after album, averaging about one a year.

Like mentioned earlier, he did not stop at just being a singer. He appeared in television dramas and sitcoms gaining a favorable response from the public. He joined in the Hallyu wave by participating in various performances and appearances in other countries. He even had his own radio show for about two years called “A Blue Night and Sung Si Kyung”.

However, the inevitable finally came for Sung, as it does for all Korean males: the mandatory military service. He started his compulsory service in 2008 and being released in 2010. One common thing that was mentioned over and over again was that he seemed different. They say that the military changes a man, but it was more than that. He expressed that he had missed performing, music, and his fans so much that he re-entered the industry with even more pleasure than before. He even held his first comeback concert in October of 2010, attracting about 6,000 people.

He made his comeback to music industry with this seventh album last month in September. The album’s title song “The First Time” is a sweet and delicate ballad that was also released earlier this year as a digital single. He has decided to produce and release a regular album and not a mini or a single album for the fans that have waited for him for a long time.

It’s been over ten years, but he is one of those singers where another ten years of steam seem like no problem. Known by many as the King of Ballads, his soft music is the kind that touches the soul.

* Like the First Time (1st album, 2001-04-04) : Like The First Time, Embrace, The Woman Inside Me, Smiling Angel, Becoming One, Blessing, For U, The Day We Broke Up, Love That Got Bigger, Show Me Your Love, Longing, The Fact That I Lived By Your Side For A Little While, The Path To Come To Me (Bonus Track)

* Melodie D’Amour (2nd album, 2002-07-19) : You Moved Me, Cactus, Sad Day Because I Loved, Love Letter, We Really Match, Even In This Way, Wish, Happy Birthday To You, Must Be Nice, Fall Hard After One Glance, Does Love Change, Sadness To Sadness, One Fine Day, Sweet Dream, Must Be Love (Duet With Kim Jo Han)

* Double Life; The Other Side (3rd album, 2003-10-16) : The Memory, Memorize It, Popcorn, First Date, Hold It In…, Shall We Kiss, If It Rains In October, Everyday Birthday, That’s The Way I Am, After That Day, That’s Still Fine With Me, Doing alright, Forever With You, Betting On The Skies

* Dream Of A Blue Night (Remake album, 2004-05-20) : Jeju Island’s Blue Night, Talks Of A Shooting Star, Hey Fox, Hyehwa Neighborhood, A Break Up For Me, Fragrant Memory, Girl, I Loved Even The Pain, If You Entered My Heart, Behind You’re Back, When My Loneliness Calls For You, A Red Rose For Wednesday, What Kind Of Longing, A Bright Morning Through Your Window

* I Want to Dream Again (4th album, 2005-04-07) : Can We Start Again, How Are You, Hello, About The Things That Are Forgotten, Class One In First Grade (feat. Kim Jin-pyo), Teary Letter, Said To Be A Fool, Don’t Have Regrets, Peapod, Thank You, Happiness On A Gray Day, You Have Something Special, It’s Easy, The Two Of You

* The Ballads (5th album, 2006-10-10) : On The Street, On Days I Miss You, The Things I Didn’t Know When In Love, While Walking That Road, Wish, You, It’s You And Me, Who Do You Love, Don’t Know That Name, The Day The Rain Stopped, New Habit, Good Morning, Sharing Memories, Sweet Imagination, Love In The Present (Feat. Ann), At That Place, At That Time, Oh, Love


Artist Of The Month
Sung Si Kyung
How does this article make you feel?