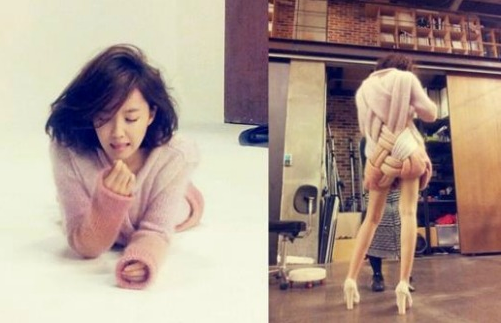 T-ara’s Hyomin Reveals the Secret to Her Long Legs

T-ara’s Hyomin, known for her great fashion sense, slim body, and frankness recently revealed on her twitter the secret to her long legs.

She uploaded a photo of herself taken during a photoshoot on her twitter account with the caption, “The secrets of a photoshoot: the nuisance of angora-knit fur, and to make incredibly long legs you wear shoes with the height of one-story.”

The left of the photo shows Hyomin laying down for a photo and making a face. It seems that the fur of the angora sweater that she is wearing got into her mouth, prompting her to call it a nuisance. In the right of the photo you see a back view of Hyomin wearing the short-length angora sweater-dress with very high-heeled white shoes.

You can also see Hyomin’s short hair in the photo, which she had revealed last month in preparation for T-ara’s comeback on November 1.