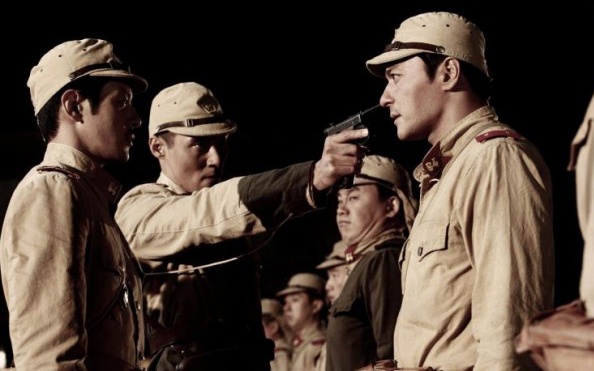 "My Way" Starring Jang Dong Gun, Odagiri Joe, and Fan Bingbing to be Released in December

On October 8, the eight minute trailer was played, showcasing the first half of the film at Woo Dong CGV Stadium in Busan.

In 1944, Kim Jun Shik (actor Jang Dong Gun‘s character) dreamed of becoming the next Sohn Kee Jung (a Korean marathon runner who won the Olympic gold medal during the Japanese colonial period) to establish a rivalry with the best Japanese marathon champion “Hasega Tatsuo (Japenese actor Odagiri Joe‘s character). Kang did not want to go to war and Tatsuo was proud to serve his country. The two were forced to join the army and went to survive together as only two Asian soldiers not only for Japan, but for the Soviet Union and Germany.

Kang Je Kyu ended a seven-year hiatus with “My Way,” a blockbuster Korean WWII film promising big action and humanism. Considering the global cast and filming all around the globe – Korea, Japan, China, and Latvia (Europe), the stadium was overcrowded with reporters and translators from each country.

In 2005, SBS TV broadcasted a documentary “Normandy Korean” about the World War II in 1944. Director Kang was inspired by the picture of an Asian prisoner who wore a European military uniform. He backtracked the journey of the Asian, who was captivated by Germany and came to France.

According to Kang, he wasn’t inspired until he watched the related documentary. This is a great mix of fiction and non-fiction. The background of where and when it takes place is based on a true story, but the marathon part is fiction.

The film is about sensitive historical issues involving imperial Japan colonizing Korea and China. However, it’s not portraying the conventional war stories of victim and perpetrators. This movie focuses on delivering the humanist message. It’s about not giving up dreams even through the hardships of surviving the war.

Director Kang said, “The chemistry between Jang Dong Gun’s and Odagiri Joe’s characters will be fun. And I cast Fan Bingbing because she was the only actress who could match the magnitude of these two actors. I have trusted and loved all three of them after filming for a long time.”

Chinese actress Fan Bingbing said, “I was scared at first because many scenes contained explosions and shooting, but after seeing the two actors give their best effort, I decided to have courage. The first Korean word I learned was ‘I’m tired.’ Often Jang asks me if I’m tired, and I say, ‘No, I’m not tired.'”

Director Kang said with excitement, “I’m satisfied with the 120% performance of the top three actors and actress representing Korea, China, and Japan.”

“My Way” will be released this December in Korea, January 14 for Japan, and end of January for China and U.S.

Fan Bingbing
Jang Dong Gun
My Way
Odagiri Joe
How does this article make you feel?