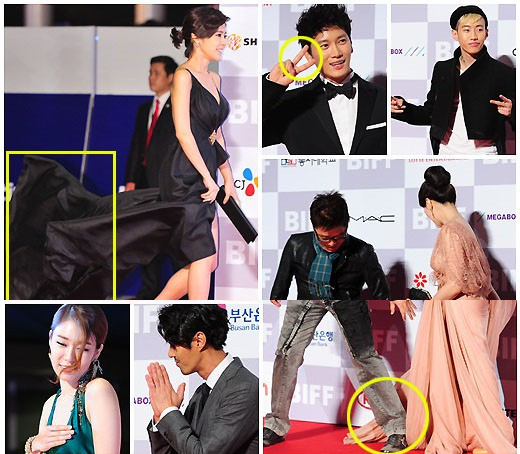 The sixteenth Busan International Film Festival was held on October 6 at 7:00PM. The real main event, however, was the stars. A variety of stars came, each with their own different personalities and tastes.

The red carpet was buzzing with excitement. Male celebrities gave different poses and the female celebrities made bold fashion statements. Let’s take a look at some of the interesting details of the BIFF.

From head to dress: An October night in Busan. The crisp autumn air was blowing a bit strongly that night. Our female stars were kept busy as they tried to maintain their calm composure as the wind mischievously played tricks on them.

Lee Yoon Ji did an excellent job of hiding her uncomfortable pose. The wind blew right up the large slit on the side of her dress, revealing almost the tops of her thighs. Yoo In Na had a hard time as well. The wind sent her long wispy bangs flying all over the place. Park Shi Yeon was the most confident and composed as she walked along the red carpet. The sheer material on the lower part of her dress fluttered and blew in the wind, but she did a great job of walking with it.

Chinese actress Fan Bingbing was the true winner of the night. She appeared on two photo walls, one for the movie “My Way”, and another with “Poppy Flower”. The real amazing feat was her transformation. After she posed with one photo wall, she quickly changed into another dress for the second. Her earrings, purse, and other accessories were completely changed as well. All this magic was performed amidst the chaos of the night in a matter of ten minutes. Her preparations and perfect transformation were praise-worthy.

However, the second dress created a problem. When Fan Bingbing came to the photo wall for “My Way”, Director Kang Jae Kyu was walking directly behind her. He ended up stepping on her dress. Although at first embarrassed and shocked, Fan Bingbing was able to bounce back and have a good laugh about it.

The most eye-popping element of the night was revealing clothing. Over the years, stars have been revealing more and more of their glamorous bodies, stripping (no pun intended) themselves of their “little girl” images. The most revealing part was the chest area. Song Sun Mi wore a halter dress that had a large keyhole design, and Ji Sung Won wore a similar dress that cut very low down. The most shocking fashion statement was made by Oh In Hae. Her orange dress covered the lower portion of her legs, but revealed almost her entire upper portion.

Legs were also very “in”. Park Shi Yeon, with her see through dress, and Lee Yoon Ji, with her unique bodice, showed off their long, thin legs.

The male stars had a pose battle by the photo wall. Some of them didn’t give the usual “hello” wave. There were fist gestures and “V” signs. It almost seemed like a cut up game of Rocks, Papers, Scissors.

The most confident of the poses was Go Soo‘s. With his thumb up in the air, he gave his famous one-eyed half wink and smiled into the cameras. It was like almost like a victory statement. Ji Sung and Jay Park gave cute “V” signs, and Jo Jin Woong pumped his fist into the air and gave a shy smile.

Ladies first! There were some star couples who walked the red carpet together. The male stars showed their manners as they guided their female dates. Ryu Duk Hwan received an A+ for his manners as he personally led Nam Sang Mi by the hand, giving her a gentleman-like escort.

French actress Isabelle Huppert appeared with former chairman Kim Dong Ho. Kim Dong Ho stepped slightly to the side, so that Isabelle Huppert could have the spotlight as pictures were taken. Movie star Kim Tae Hoon did the same for his date Han Ye Ri. The men stepped down a little so that their female dates could shine in the spotlight. How sweet!