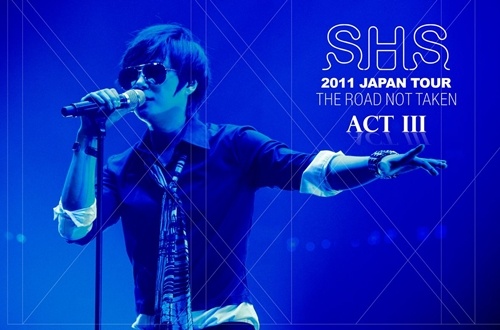 Kiyokiba Shunsuke, the former member of EXILE, and Young Joon from Brown Eyed Soul will make a special appearance on “SHIN HYE SUNG 2011 JAPAN TOUR – THE ROAD NOT TAKEN ACT III” at TOKYO DOME CITY HALL on October 16. Previously, Young Joon also made a guest appearance at the concerts in Seoul and Busan last September.

They shared one thing in common that both of them are the main vocal of their group. Shin Hye Sung is a main vocal of Shinhwa and Kiyokiba Shunsuke was the main vocal of EXILE before he left the band. Therefore they became better friends with each other and wanted to develop their friendship a lot more so they decided to be on the stage together to make a fantastic performance.

This concert will be particularly special because Young Joon from Brown Eyed Soul will come to Japan to join the concert. He sang a duet with Shin Hye Sung for “Come a Little Closer” in fourth album and also made a special guest appearance at concerts in Seoul and Busan.

Shin Hye Sung’s first Japan single album “I Believe” (which reached number 4 on the Oricon daily Chart on the day of album release on October 5) is well received with promotion activities such as handshake events, magazine interview and appearances on TV and Radio. Now this album has reached number 7 on the Oricon weekly single chart. It proves Shin Hye Sung’s outstanding musicality as the original Korean Wave star even in Japanese music market dominated with idol stars of visual performance.

“SHIN HYE SUNG 2011 JAPAN TOUR – THE ROAD NOT TAKEN ACT III” was originally planned to have just one concert but will have two concerts at 3pm and 7pm on October 16 in response to the keen request of Japanese fans.