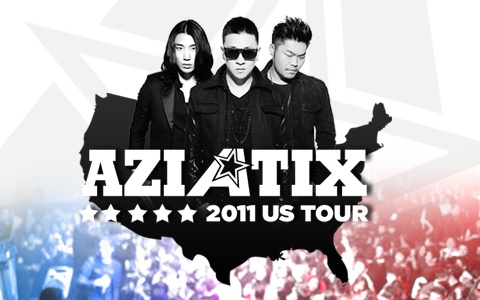 
Just six months following a successful debut, Aziatix is ready to embark on their first tour in the United States. So far the trio has arranged for stops in 14 different cities across the US in November. They will be targeting major cities along the East and West coast.

Below is a list of tour dates, venues, and cities. Currently Los Angeles, San Diego, San Fracisco, Philadelphia, and New York have links to purchase tickets. Check back on the events page on their web site for the links and future updates.

Aziatix is comprised of three Korean American artists united under the production leader, Jae Chong who recently worked with JYJ on their English album “The Beginning.” Members Eddie Shin, Flowsik, and Nicky Lee each have extensive experience in the American, Korean, and Taiwanese music industries as well. As a group, they have release two albums, “Aziatix” and “Nocturnal” and several music videos.

They have received support from SNSD‘s Tae Yeon, JYJ’s Jae Joong, Isak, and Brian Joo for their international endeavors. In addition, Aziatix has been well-received by many American and Asian portals including AOL Music, Myspace, YouTube, iTunes, CNN Go, and MTV K.

Aziatix
concert
How does this article make you feel?