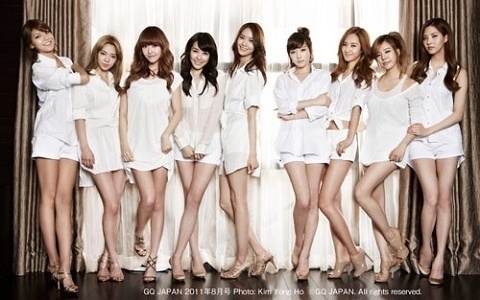 SNSD’s USA Debut with "The Boys"

Girl Group SNSD is debuting in America in November by revealing their new single, “The Boys.” In the Album Jacket, all of them are wearing wedding dresses, emitting goddess-like auras.

The Korean artists that produced American singles are Kim Bum Soo, Wonder Girls, and BoA. Many netizens are curious to whether they will break the Billboard records and establish themselves as the “World’s Top Star.”

Their company, SM Entertainment, stated on October 12, that SNSD will debut in America through Universal Music Group Interscope Records, through their new single, “The Boys.” It has been also said that the song has plans of being released through Europe and South America through Universal Music Group. The Music company is known for having successful artists such as Lady Gaga, Lil Wayne, Justin Beiber, Mariah Carey, Taylor Swift, Rihanna, Owl City, Black Eyed Peas, Nicki Minaj, Keri Hilson, Ne-Yo, and etc.

Interscope Records is a U.S. major records company, having developed sensational artists such as the ones stated above. In SNSD’s Korean album, which is to be released on October 19, there will be three to four other minor songs featured. “The Boys” is a work made by Teddy Riley, who also produced Michael Jackson’s “Dangerous.”

SNSD’s American music that is to be debuted is an edited version of the original Korean songs, and currently, they have not yet formed an official contract. Therefore, it is a bit too early to see this as an official American debut. SM Entertainment has also stated that the music file is not purposely made for the American debut, and that they are not planning on doing any activities in America. However, they are planning on uploading the song on YouTube and Facebook, and advertising it to see the response from the general public.

Here are some pictures of SNSD:

Teddy Riley
How does this article make you feel?