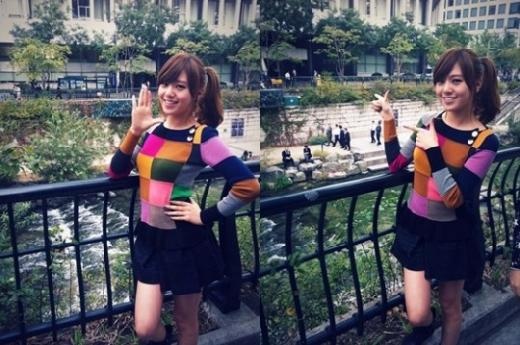 After School’s Lizzy Reveals a Cute Picture of Herself

After School’s Lizzy took a picture of herself in front of “Cheonggyecheon,” which is a massive urban renewal project on the site of a stream that flowed before the rapid post-war economic development of South Korea.

She posted that picture on Twitter on October 12 with the message, “Lizzy’s photoshoot in front of Cheonggyecheon.” Lizzy is shown wearing colorful clothes while giving a cute grin. It appears as though Lizzy is introducing Cheonggyecheon to viewers.

Netizens commented, “Cheonggyecheon is so long that I don’t know where she is. If I knew I would buy you dinner,” “Your hair is prettier and it looks like you are getting younger,” “Is today’s concept as a good-will ambassador for Cheonggyecheon?”

Orange Caramel, the sub-unit group of After School that Lizzy is part of, has recently released “Shanghai Romance” and its music video.

After School
Park Soo Young
How does this article make you feel?