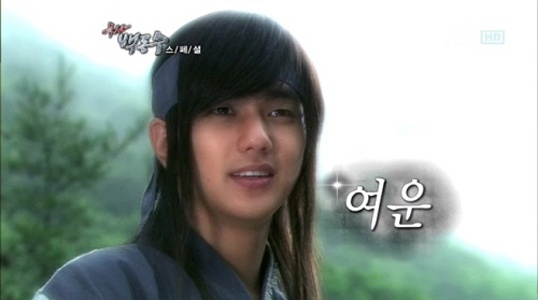 The SBS historical drama “Warrior Baek Dong Soo” aired its final episode on Oct 11., followed by a Behind-The-Scenes Special that was revealed for the first time.

What captured the viewers’ interest during the Special was 18-year-old Yoo Seung Ho, also popularly known as “Korea’s Younger Brother.” Despite taking on the dark and tragic role of Yeo Woon, who was born with an innate desire to kill, Yoo Seung Ho proved to retain his star status not only with the viewers, but also with his colleagues.

Actor Choi Jae Hwan, who acted as Yeo Woon’s buddy Yang Cho Rib, remarked, “Although he’s younger, I really envy him. Even when his hair is being tossed by the wind, he looks good. When he’s eating, he eats in such a way that makes you tingle.”

However, the BTS also revealed Yoo Seung Ho eating continuously in various scenes, with captions describing him as “eating as if his life is at stake,” earning him the nickname of “Mok-bo Seung Ho,” or “Glutton Seung Ho.” When the interviewer asked about his “gluttony,” Yoo Seung Ho insisted playfully, “I must eat whenever I can. Hyung, I’m still growing. If I don’t grow, it’s going to be your fault.” When asked what his ideal height was, Yoo Seung Ho hoped to add 5 cm to his current 175 cm.