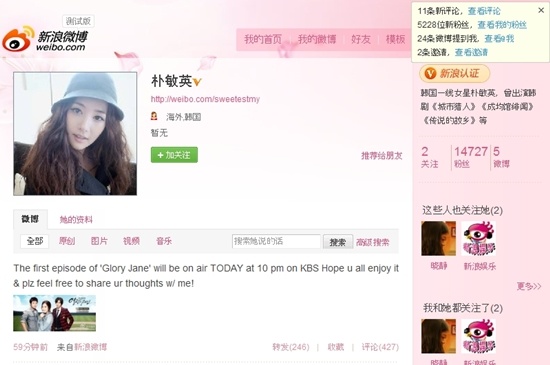 Actress Park Min Young has created an account in one of the world’s most popular social network services, Weibo.

Only after an hour since she created a Weibo account, over 10,000 Chinese fans have requested to be her friend. Furthermore, this news was posted on the main showcase of China’s popular portal site with continuous updates. She has been receiving explosive attention and is once again, showing her Hallyu popularity. After another day had passed, there has been over 1,000 replies for each post she made and the number of friend requests is steadily rising.

Sources from Sina Hallyu Channel say, “Hundreds of thousands of Chinese fans have requested Park Min Young to create a Weibo account. It is very difficult to receive that much interest and love from that many people, especially for a female actress. But as soon as Park Min Young’s account opened, the number of replies, comments and friend requests are continuously rising. Some of the contributing factors to this explosive response is probably because Park Min Young starred in some of Korea’s most popular dramas that were aired overseas such as “Sungkyunkwang Scandal,” and “City Hunter.” Both of these dramas enjoyed great popularity in China. Therefore, by Park Min Young creating a Weibo account, Chinese fans are able to feel more connected and more closely interact with this superstar.”

Park Min Young will appear in the new drama, “Glory Jane“ as the ever-optimistic Yoon Jane. It is predicted that this drama will further enhance her Hallyu popularity in the future.

Park Min Young
Glory Jane
How does this article make you feel?