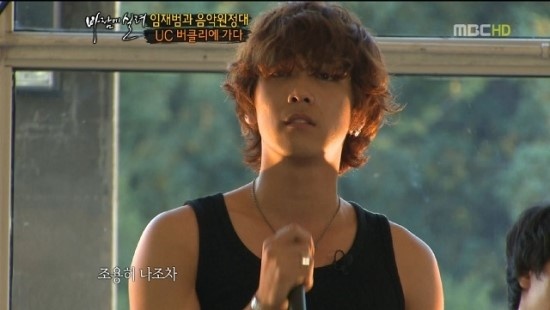 On Oct 16 during the broadcast of MBC variety “Our Sunday Night – Riding The Wind,” Lim Jae Bum and his music expedition team visited UC Berkeley in the US, where they held a concert attended by more than 1000 students. The episode also featured the first appearance of new member Lee Hong Ki, who impressed all by singing “Confession,” a song he loved. “Riding The Wind” also showed their preparations and rehearsals before the actual concert.

When Lee Hong Ki expressed his worries about singing Lim Jae Bum’s song, Lim Jae Bum said, “Even if Elvis Presley is in front of you, you’ll still have to greet him and display your confidence.” Bearing in mind the words of this grand-senior who is 28 years older than him, Lee Hong Ki sang “Confession” in front of Lim Jae Bum during a rehearsal.

After his impressive rendition, he was met with wild applause, but Lim Jae Bum advised, “While others are saying you did well, I don’t think so. When you’re singing this song, it feels as if you’re afraid that you’ll be criticized. Just sing it like you would speak it.”

Eventually when Lee Hong Ki sang “Confession” at the concert, Lim Jae Bum was full of praise, “Hong Ki, you did well. You already have the ‘shifting sound’ of a rock vocal.”

Besides the addition of Lee Hong Ki, the concert was also the first performance for actor Lee Joon Hyuk (City Hunter). Receiving vocal training by Lim Jae Bum, the actor couldn’t hide his nervousness during the actual performance, where he missed the opening beats of his song “Flying Up” (Bi Sang). With the encouragement of Lim Jae Bum and the cheering audience, he eventually sang the song successfully in his second try.