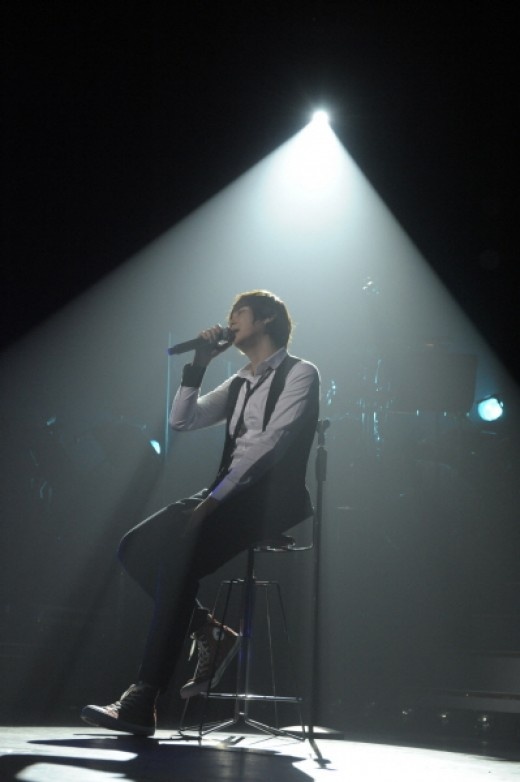 Shin Hye Sung held his Japanese concert “SHIN HYE SUNG 2011 JAPAN TOUR – THE ROAD NOT TAKEN ACT III” at the Tokyo Dome City Hall on October 16 to celebrate his first Japan single album “I Believe.” He had two concerts on that day and about 5,000 Japanese fans came together.

Shin Hye Sung started by performing “Awaken,” and received many cheers from the audience. He continued to sing his other songs such as “Gone Today,” “Peter Pan’s Serenade,” “Please Don’t Love Someone Else” and “Tock Tock.”

Since this was a Japanese concert, he also sang “Night Date,” “The Friend,” “Our Eternity” and “Over the Rainbow” from his Japanese album “Find Voice in Song.”

When he started singing “Love Actually” in the middle of the concert, a video clip played, showing fans’ messages for Shin Hye Sung through writings on sketchbooks. It was truly a good way to communicate with fans.

Young Joon from Brown Eyed Soul came on stage to sing a duet “Come a Little Closer” with Shin Hye Sung. After previously joining Hye Sung’s concerts in Seoul and Busan, he also appeared for this concert in Japan.

Kiyokiba Shunsuke had also made a special guest appearance on this concert. When they started singing “I Believe” which is also the title song of Shin Hye Sung’s first Japan single album, it made the hall explode with the cheering of fans.

Shin Hye Sung also spoke during the concert, he said “The six members of our group are planning to release our album on March 24 next year and we are also planning to hold a concert. We are meeting each other a lot lately to discuss these matters. I am now busy with the preparation of my Korean album, which will be released in the winter of this year. I am planning to include a few high-spirited songs in this album.”

Shin Hye Sung also stated “I always appreciate passionate response from Japanese fans. Especially, I am very glad to collaborate with Kiyokiba Shunsuke on the first single album and am thankful that this album is well received. I would also like to thank Young Joon that he came to Japan for this concert. I will try to be a better singer while collaborating with other good musicians.”

Shin Hye Sung had finished his Japan concert schedule and will have his first solo concerts (2 concerts) in Hong Kong titled “SHIN HYE SUNG 2011 Tour in Hong Kong- THE ROAD NOT TAKEN” at “Asia-World Expo” on November 27.