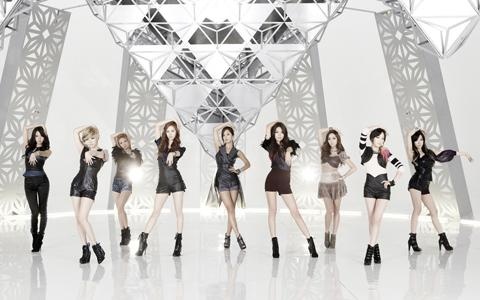 During an interview with Chosun Daily which took place on October 18, SNSD opened up and talked about working with Producer Teddy Riley, what kind of mindset they had while preparing for this album and also what they hope to accomplish through this album and in the future. All the members, except Yoona who was at the time filming her drama, were bright and cheerful, always kept a smile and fully cooperated throughout the interview.

Part 1. Dance Practice? We Did It Until It Was Hard to Walk Up and Down Stairs (Taeyeon)

“I wish people wouldn’t compare us to other girl groups when it comes to Japanese Arena concerts or our performances overseas.”

SNSD has collaborated with producer Teddy Riley, who is famous for producing for the late Michael Jackson, in order to take the world by storm.

Through America’s Universal Music Group, SNSD is planning to release their third full album “The Boys” worldwide, starting from America, Europe, South America and of course, Asia. Their new song “The Boys” has boldly broken out from the trend of ‘hook-songs’ and have gone with a powerful drum sound and rhythm with a unique configuration of beats and harmonization, creating a pop-urban dance number.

Through many variety shows and TV appearances SNSD has been a familiar face on screen, however, it has been approximately 11 months since SNSD has made a comeback to the Korean music scene. The girls mentioned that in order to show their fans a new upgraded performance, all nine members fully devoted their time into constant practice. Taeyeon confessed, “Due to all the hard and late night dance practices, we got to the point where it was hard to go up and down the stairs.”

Unlike their hard dance practices, the girls revealed that when it came to recording their title song with Teddy Riley it was very free and a comfortable atmosphere. Leader Taeyeon revealed, “When it came to the day of our recording, Teddy asked us to just dance and stay loose while recording in order to get rid of our nervousness. It was a lot of fun.” Yuri continued saying, “The atmosphere of the whole recording studio was really comfortable. The whole time Teddy got us to bring out character and voice color that each member had. And he gave us a lot of compliments! (Laughs)”

On this new album, a noticeable point would have to be that it is the first time that all the members have made an attempt at rapping. Seohyun confessed, “Because this is our first time rapping after we’ve debuted, we were really worried. Through this album we were able to experience a lot of new genres of music. I’m especially looking forward to Hyoyeon’s contribution to the song because ever since we were trainees she was known to have a good sense of beat in rapping and hip-hop dancing.”

Even though they are coming back with a full album with a “worldwide” concept the girls announced, “We have no long-term plans on promoting overseas, for the meantime we will just be focusing on our promotions within Korea. And also, performing overseas isn’t the only way we can stay in touch with our international fans. There are a lot of ways we can stay in touch with our overseas fans, such as YouTube and Facebook. (Laughs)”

Part 2. First Attempt at Writing Lyrics. I Made Changes to the Song Even When Recording (Sooyoung)

What is even more special about this new album is that one of the members, Sooyoung, made her first attempt at writing lyrics. Sooyoung, who has been known for her kindheartedness and strong religion, wrote lyrics for the song “Spring Day” (How great is your love?) thinking about God and expressing the warm-hearted love that he shared for us. Sooyoung mentioned, “The song is not all about God. (laughs) It is also about the love that we share with our parents, lovers and friends. I was given this proposition to write lyrics for a song while I was on a break. I thought about it for a while before I actually accepted to do it. I put a lot of thought into the lyrics but also had a lot of trouble with it at the same time. Even up to the day of recording I still hadn’t finalized it, and even when we were recording it, I was still making changes to the song. It wasn’t a laughing matter at the time, but it was still a very memorable experience.”

It was mentioned that Tiffany had the most confidence when preparing for the English album, and with that comment Tiffany replied, “Because I grew up with an English-speaking background, preparing for this album wasn’t too difficult.” Jessica then commented, “Although we didn’t specifically study so much before hand, we did however concentrate and put a lot of focus on correcting our pronunciations.” When asked about entering the America Billboard Charts they answered, “We are just happy and honored with the fact that our album gets to be released in America. Billboard? We don’t really have high expectations to make it onto that chart. (laughs)”

As well as keeping the existing image of SNSD, the girls have now incorporated a “worldwide” concept. With the anticipation on what the girls will bring out with their new album, the girls spoke out saying, “Our new stage and performance will be cool and powerful. We have also broken out of our uniformed outfits and have changed to new looks where each members’ characteristics and image can be clearly expressed. There will be a lot of new aspects to our performance, so please look forward to our comeback!” (Tiffany, Taeyeon)

Part 3. International Fans Who Asked for Hugs While We Performed Surprised Me (Taeyeon)

“Fitting The Definition of ‘Girls’ Generation’? We Promote New Concepts to Fit Our Age.”

When deciding a new concept for their album it was said that the girls expressed, “Do we still have to wear white T-shirts and jeans?” With the original meaning of ‘So Nyuh Shi Dae’ = ‘young girl generation’, the girls have received a lot of comments about whether they should keep to the cute and girly image. Hoewever, the girls have chosen to go with a change and slowly show an older and upgraded concept each time. So instead of going with ‘Right Now it’s Girls’ Generation’, they have changed the meaning of their name to, ‘Girls’ Generation of Today’. Seohyun stated, “We grow physically, mentally and musically with every new album, but doesn’t mean that we will make drastic changes each time. Because full albums consist of many songs we cover a lot of genres and different styles of songs. I hope that people don’t expect too much from us~”

Even with the whole girl group rivalry and competition, Tiffany and Sooyoung seemed to be enjoying themselves. They revealed, “Because we are having a comeback after such a long time away, we are just excited to see everyone perform. It’s kind of the feeling where an overseas artist that I liked listening to while growing up was coming to Korea to perform, nerve wrecking, yet exciting.” Seohyun added, “From a certain point there was just an increase in juniors (hoobaes). It was fascinating, but was also an incentive that I need to work harder.”

When asked about any episodes or happenings during overseas concerts and performances, Taeyeon revealed, “Once, some cheeky fans tried hugging me while I was performing on stage. I was a little bewildered. (laughs). Also, during our Summer Sonic performance in Japan we experienced some audio problems and had to stop performing until they fixed it. When the staff told us it was due to the sound system overheating we told the people in the crowd that it was due to their passionate cheering, so after lightening up the mood we were able to enjoy the rest of our performance.”

Instead of continuing with ‘hook-songs’, the new song “The Boys” has completely broken away from the ‘hook’ trend and have gone with a song that has a smooth flow from start to finish. Another difference that this song holds is that instead of worrying about the results the song may bring, the girls have decided to go for change and passion. That is why their comeback performance is highly anticipated.

Part 4. Members Talk with Each Other Frequently Through Messaging Apps on Smart Phones (Seohyun)

“Drinking at Our Dorm? We Like Drinking Wine at Cafes with a Good Atmosphere.”

Before releasing their English album SNSD successfully completed an Arena Tour in Japan as well as other overseas concerts. The girls said they were able to receive a lot of strength after seeing all their fans that had come to see them. They also talked about the various types of fans that they had come across. Some fans who cried endlessly while seeing SNSD, one fan who had ‘SNSD’ (in Korean) tattooed on his arm, a little girl who had come to the concert with her mom while wearing a SNSD costume, and an old white-haired man who had their names printed on a t-shirt. Sooyoung and Seohyun expressed, “We were sad that the only place we could communicate with our fans was through our music on stage.”

As the interview was coming to a close, we asked how the members overcome differences in opinions and decisions. Tiffany answered, “I think because we all have faith in each other and know what the other is thinking, we were able to come this far.” Seohyun also added, “It is important that we all communicate on a daily basis. Recently, our new hobby is to chat on chatting rooms through Messenger Apps on our smart phones.”

Also, now that the whole group is now adults, we asked about their alcohol intake, and if they drank ‘soju’ at their dorm. Laughing out loud they answered, “We don’t drink to get drunk. When we have tight schedules, whenever we have spare time, we would prefer to spend it sleeping. (laughs) But when we do have casual drinks, because we are girls, we like to enjoy sipping wine at fancy cafes that has a nice atmosphere. (Silence, then the girls all laugh out loud)”