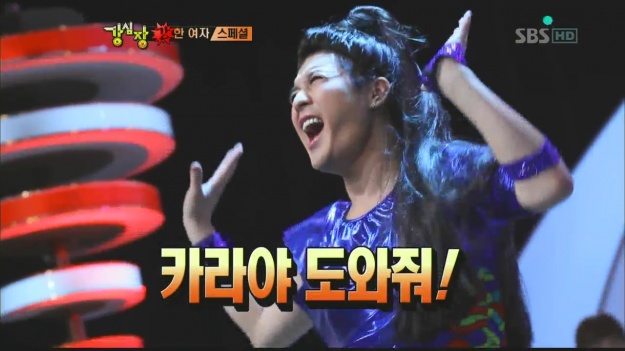 On the latest of Strong Heart, which was aired on October 18, Shindong surprisingly appeared onto the central stage dressed up as Goo Hara in the “Step” music video. His transformation aroused laughter from Goo Hara and the other guests and members.

Towards the start of the episode, he appeared onto the stage dancing to “Step.” He had long, straight hair that was tied up and had strong eye make-up on, which emphasised the shape of his eyes. In addition, he also wore a sexy costume, which revealed his body-line.

Following on, he came down to the central stage, imitating the trade mark dance of “Step.” Goo Hara and Kara’s Park Gyuri also came down to the stage, dancing along to “Step” with Shindong.