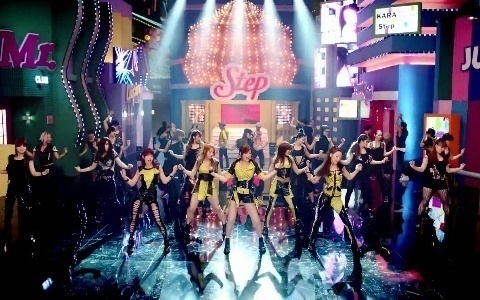 Have you ever wondered about the relations between sunbaes and hoobaes, when girl groups and singers were complaining about hoobaes not treating them with respect recently?

“Hold on. I don’t get it! What are sunbaes and hoobaes?”

This might be kind of confusing for people of American culture, since there’s no such thing as honorific language or the whole sunbae and hoobae ideas in any of the industry. At work, there’s a boss, and there are your co-workers. At school, we generally treat each other similarly, older and younger alike. Kim Kardashian and Justin Beiber might get alike friendly in America, but that kind of situation rarely occurs in Korea.

In the work world and entertainment world the whole honorific system becomes a bit confusing.

Kara debuted 5 years before some of the newer groups, so Kara is a sunbae to the younger girl groups. Sunbaes are treated with respect, and usually have more social power. However, if Kara’s hoobae girl group consisted of 30 year-old people, it might become a bit confusing. Do the 30 year-olds have to use honorific form to girls that are around 10 years younger than them? Yes. It might seem a bit confusing, but in the work industry, the sunbae and ideas become a bit different. However, just because Kara is a “Sunbae” does not mean they should not use polite honorific language and not bow their head when they greet their 30 year-old hoobaes.

When Kara said that their hoobaes did not greet them, the system became confusing to many. Also, when singer Mose said T-ara never greets them, it also gained a lot of bad attention for T-ara.

He previously tweeted, “This one girl group that was always on the news for attitude problems I knew it. They’re notorious for not saying ‘hi’ or greeting anyone. The girl that said it was a misunderstanding? She never said hi to me. Even before their debut, when I saw them in the recording room several times… my neck felt stiff (In Korea, you lower your head to greet, meaning his neck stayed stiff). Ha. Especially when seeing each other on stage, lightly saying ‘hi’ is common etiquette, but they all just watched me said ‘hi.’ Wow~ They’re so big ,eh? I usually don’t say this, but people that don’t know how to properly say ‘hi,’ regardless of celebrities or elders, do not deserve proper treatment from anyone.”

Regarding the Seo Taiji and Ki Kwang incident: Seo Taiji is a sunbae to Gi Kwang, because he pioneered the modern K-Pop industry and debuted way before Gi Kwang. But Gi Kwang was put under fire for calling Seo Taiji “Seo-ssi (Mr. Seo)” during a TV show.

An entertainment company official stated about this matter, “In fact, there would be no problem if we drew a clear line between sunbae and hoobae relations, but recently since the idol groups became more competitive, that distinction is becoming less apparent and it is beginning to cause problems.”

So when should you use honorific language? You should use honorific language to people that you have never met before, your teachers, your sunbaes or hoobaes (if you do not know them personally), and generally everyone that is older than you. Honorific languages have their own idiomatic words, but usually, putting a “-yo” or “-hasaeyo” after any phrase works. For example, “Annyung” is informal, but “annyunghasaeyo” is formal. In terms of addressing people, “-nim,” or if you are referring to your sunbaes, “-Sunbae-nim” should be used. You can address your sunbae with just “Seo Taiji Sunbae,” but that is a privilege reserved for close and friendly people. In Japanese manga, people usually refer to each other with their last name, and first name only if they are friendly together. It’s like that, except with honorific language.

American fans have come back with “Netizens are so unreasonable and stupid, get over it,” but it’s a situation far more serious than just “misaddressing” someone. It’s a sign of respect, and not properly addressing your sunbaenims is more than worthy of criticism. Not following any of the honorific sunbae/hoobae rules above is considered as an extremely rude behavior, and not addressing your elders properly would definitely result in getting fired from a job, or public humiliation and of course, bad rumors. Also, the word “netizen” is a word to generally describe people on the Net, not just specifically enclosed to Korean users.

Korea and other Asian countries generally have the rule: “The older you are, the more respect you deserve.” When younger people do not treat older people with respect, they will be lashed upon with not having been raised or brought up properly.

Still don’t understand this confusing “respect culture” and “honorific language”? Leave any questions or comments below!

KARA
T-ara
How does this article make you feel?