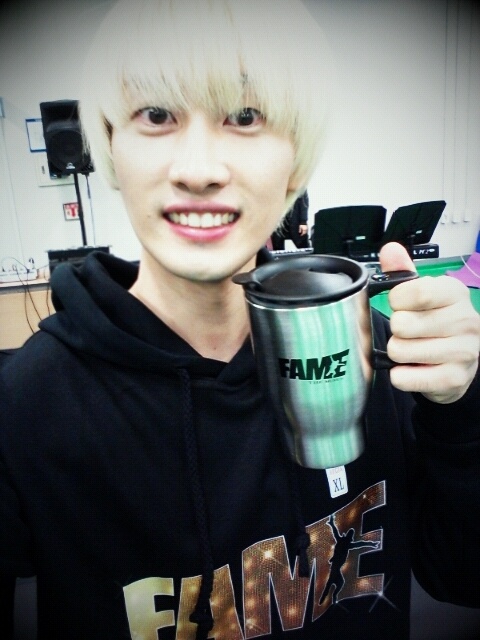 Early today, Super Junior‘s Eunhyuk uploaded a series of pics on his twitter account, showing off the presents sent to him and to the crew of “Fame” musical, by his fans. The gifts sent were several hoodies with the logo FAME printed in front. Also, he and the crew received cups with the logo on it as well.

This is the first musical that Eunhyuk participates in, following band mates Sungmin and Ryeowook who previously cast in musicals on their own.

He seemed to be really happy and excited for the presents he got and also posed with the cup and hoodie and wrote: “Thank you so much” “Hoodie with Fame logo printed on it!! And also a cup! I feel really thankful with the support from all fans, thank you all, I feel so alive, full of energy!” “I’m very, very happy with the gifts prepared by all fans!! I’m very, very happy with our Fame family!! Thank you!! and be ready for the best performance!! ^^”.

The background for this musical is about an Art School with various characters and sights like acting, ballet and violin. It is a best seller musical, performed in 16 countries with more than 300 productions. From 1995 until 2006, the musical has brought 4 million people and has received a lot of support from the world until now. It is made by Korea’s New Production, with a better upgraded stage and the best casting.

For this musical, Eunhyuk will perform the role of “Tyrone Jackson” and it will also count with the performances of Son Hoyoung, SNSD’s Tiffany, The Grace‘s Lina, and Trax’s Jungmo. The first round of tickets started selling on September 6 and it will start on November 25 until January 29 in Olympic Park, Woori Financial Art Hall, Seoul.