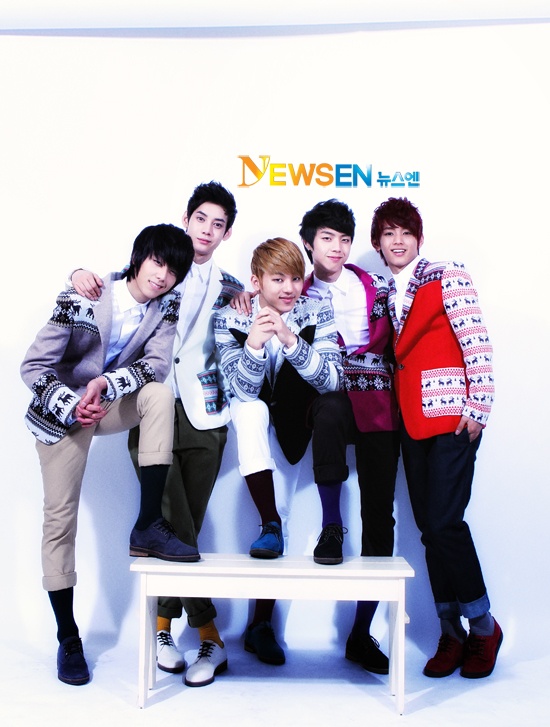 If you’re a fan of Hwanhee, you’ve most likely heard of his new boy group, MYNAME, who’s slated for their debut in just a few days. The group is considered his last present before he enlists in the army and many are highly anticipating whether the boys will make an impact on the industry like their senior was able to.

Comprised of members Chaejin, Joon Q, Seyong, Gunwoo, and Insoo, MYNAME boasts quite the history of experience despite their young age. Some might recognize Seyong, as he once starred in the drama, “I Believe in Love,” and was also a JYP Entertainment trainee.

As for one of the most important aspects of success, Seyong chose teamwork. “We’ve been rehearsing so much lately that we don’t even feel like we’re going to make our debut. Through my long years as a trainee, I’ve seen a lot of groups form and disband. In the end, I realized that if there’s no communication and teamwork, the group has no way to go but down. That’s why even after rehearsals, we’ll gather up and talk for at least 10 minutes before we fall asleep.”

Before Seyong dreamed of becoming a singer, however, he was on his way to becoming a soccer player. “I always wanted to play soccer and had decent talent in it. After receiving a casting offer from JYP, however, I gave up soccer. I honestly had no intentions of becoming a JYP trainee but their officials came all the way to Busan to scout me and my parents thought it’d be a good opportunity.”

Insoo is another recognizable face, as he was in “Superstar K2” and is also the best friend of MBLAQ‘s Seungho. Although he studied theater and film at Anyang High School, he was accepted to his school’s dance major, putting him at a sort of crossroads. For two years, he cried himself to sleep because he didn’t want to wear tights. Once he nailed a complex turn, however, he grew to love dancing and even majored in it in college.

Gunwoo is the group’s leader. “Until now, I’ve never once failed in my life. I’m confident in our debut stage.” Gunwoo considers himself a lucky guy. Like Gunwoo and Seyong, he was a big soccer fanatic as a student. The reason he quit, however, is different. “Playing soccer makes me hot and I get too tanned from it…”

Member Joon Q topped portal searches for his striking resemblance to Lee Seung Gi. Behind his cute looks, however, is a bold laughter that rings in the room. He looks like he’d be the type to sing smooth ballads to win the hearts of nuna fans, but he’s actually the group’s rapper. “I began rapping in junior high while performing with a band. For some reason, I’m more partial to rap music than ballads.”

Maknae Chaejin lives up to his role of maknae and is quite babyish in his words and looks. His charm is his adorable eye smile. He’s not just an innocent soul, however, as he knows how to use his cute looks to his advantage. He revealed, “There are times when the hyungs will reprimand the dongsengs. When I make my eye smile, they can’t do anything. It’s my biggest charm, actually.”

Chaejin doesn’t have a cell phone and lives with the members in a dorm away from his parents. The members were quick to reveal that he’d cry sometimes because he missed his mom so much.”

Asked about their mentor and producer, Hwanhee, MYNAME turned serious. “Hwanhee not only puts a lot of emphasis on the quality of our music, but also our character. He always tells us not to get too cocky with our selves. There is pressure in the fact that he produced us but we love it and consider it an honor because of the impact he made in the industry. He’s nice when he has to be, but when it comes time to record, he’s strict and tiger-like. Recently, he told us to leave the studio because we hadn’t taken care of our vocals. That’s how detailed he is, and we’re very grateful for that.”

MYNAME will debut on October 27 on Mnet “M! Countdown” with “Message.”

Hwanhee
Joon Q
MYNAME
seyong
How does this article make you feel?