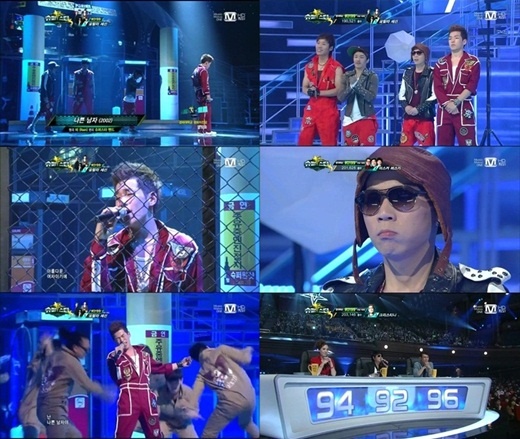 On last weekend’s Mnet “Superstar K3,” Ooh La La Session again showcased their many talents by transforming into “bad boys.” The mission was to act out a drama while performing on stage, and Ooh La La Session, the very first to face the audience, performed Rain’s “Bad Boy.”

The storyline of Ooh La La’s stunning performance went along the lines of the members forcing themselves not to fall in love with Two Months’ (another finalist group) Kim Yeh Rim and thereby turning themselves into “bad boys.” Another unique aspect of their drama was that the leader, Park Gwang Sun, was the only vocalist on stage while the other members danced behind him.

Again, the scores for Ooh La La Session were considerably high, with Lee Seung Chul giving the group 92 points, Yoon Mi Rae 94, and Yoon Jong Shin 96 out of a total 100. Yoon Jong Shin commented that “It seemed that the group was enjoying their performance and that’s always good to see. I know I’m supposed to critique but I can’t find any faults with this.”

However, even with the great results their average was a 94 points, which was toppled by an astounding performance by Christina, another finalist, who performed her rendition of 2NE1’s “Lonely.” Her performance blew the judges away, receiving scores of 98, 97 and 90 from Lee Seung Chul, Yoon Mi Rae, and Yoon Jong Shin respectively. This resulted in the “Super Save,” the prize awarded to the highest average score and an automatic pass to next week’s competition.

Along with these performances, Two Months performed Panic’s “Snail,” Busker Busker sang “Coincidental Encounter” by Koo Chang Mo, and Kim Do Hyun sang “The One I Cannot Have” by Bank. In the end, it was Kim Do Hyun who got eliminated, narrowing the gap to four finalists.

Kim Do Hyun – The One I Cannot Have