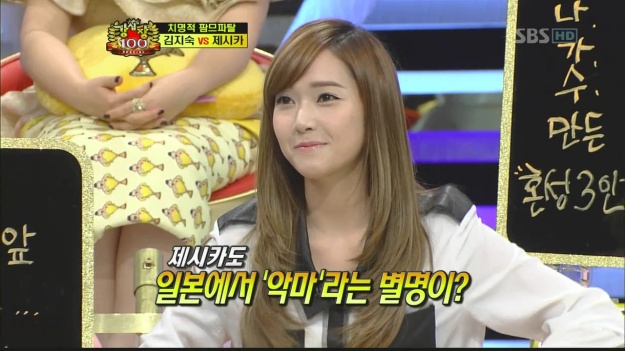 SNSD’s Jessica Was Called a "Devil" in Japan?

SNSD’s Jessica spoke about her “devil” nickname for the final talk battle between her and Kim Ji Sook on SBS “Strong Heart.” The first part of the talk battle was broadcast on October 25.

For the final round of the episode, actress Kim Ji Sook was up against SNSD’s Jessica.

Lee Seung Ki mentioned that both of the guests had the “devil nickname.” Kim Ji Sook denied this saying that she is only a devil on TV, and not outside.

Lee Seung Ki also brought up the fact that Jessica had the nickname “Devil” in Japan.

Jessica explained, “I found out that I had the nickname ‘Devil’ through the news. I was extremely upset.”

She continued, “But, I found out that the Japanese meaning of ‘Devil’ which is ‘Akuma’ means, it’s kind of embarrassing for me to explain this, but it describes a person that has critical beauty. It has a similar meaning to ‘Femme Fatale.’ I was very thankful to Japanese fans.”

Then Strong Heart focused on Kim Ji Sook’s story. Kim Ji Sook spoke about how she used to be one of the top actresses and then once she began to fall away from the spotlight she could not handle the depression.

However, there was one person who gave her inspiration to continue on and it was none other than John Stephen Ahkwari. He was a Tanzanian marathon runner who was injured with a badly cut and dislocated knee, during the 1968 Olympic marathon. But, despite his injuries he continued finished the race, when asked why, he replied, “My country did not send me 10,000 miles just to start the race; they sent me to finish the race.”

After watching that she learned, “Ah, that is how you have to live life. Life isn’t completed when you are famous and successful. You have to continue running with whatever life you are given.”

Jessica was asked to comment and she said, “I have actually thought of that a lot. Currently we (SNSD) are receiving a lot of love, and I have fears about when that will go away. However my sister (Krystal) is a part of f(x) so all my junior singers feel like family. I think it is right to move aside for juniors eventually. What I believe is that you have to make your spot even prettier and brighter so that the people after you come to take the mantle, they will shine even brighter.”