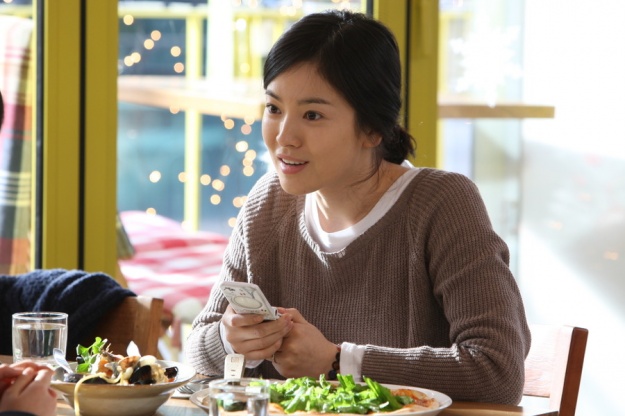 Song Hye Gyo was recently inteviewed by TVReport about her latest movie “Today“, which was released on October 27 in Korea.

In the movie “Today” (English title “A Reason To Live”) directed by Lee Jung Hyang, Song Hye Gyo rarely smiles. Her character Da Hye had quit her job at a broadcasting station after the shocking loss of her fiance (actor Ki Tae Young) in a motorbike accident a year ago. Da Hye then became a freelance documentary PD exploring the theme of forgiveness.

As a documentary PD, Da Hye met the families of those who have killed, families of those who have been killed, and religious workers, hearing stories of painful pasts and alienation from society. Although Da Hye forgave the youth who caused the death of her fiance, the movie seeks to explore the meaning of true forgiveness, especially after Da Hye realizes belatedly how the youth she forgave did not atone for his misdeeds.

In the interview, Song Hye Gyo admitted, “After filming this movie, it made me think hard about whom forgiveness is meant to be for. I wondered whether the word ‘forgiveness’ was said this easily to make ourselves feel better.”

“I have never internalized a word like “forgiveness” so seriously, for such a long time (throughout a movie). Vaguely, I understand the word is well-meaning. However, when you think separately from the perspective of the object (giver) and subject (receiver) of forgiveness, it becomes difficult to grasp. No matter how you want to forgive, if the party to be forgiven is not prepared to receive the forgiveness, then there is no genuine forgiveness at all.”

This is the darkness and weight of “Today,” a movie by director Lee Jung Hyang after a 9 year hiatus, whose previous movies include “The Road Home” (2002) and “Art Museum By The Zoo” (1998). Towards the later half of the movie, viewers can expect a tearful catharsis rarely experienced from other movies. Even Song Hye Gyo, whose character suffers much in the movie, said, “If you wait for the actors, there will come a time when they will reward you with their existence.”

When asked how she feels about the many praises for the movie, she replied, “Ae-ey… that’s impossible,” as she lowered her head. “The regrets I felt for this movie were so much more than my other works. Although the director tried to instill more courage in me by calling me ‘Da Hye Gyo,’ I felt my responsibilities become heavier instead. I’m not confident of doing this again,” She said with a laugh.

Since “My Girl And I” (2005), works starring Song Hye Gyo often have scenes where she is riding on a bike. “During ‘My Girl And I’, most of the time I was behind (Cha) Tae Hyun oppa in the bike scenes. Eun Seo was like that too, in ‘Autumn In My Heart.’ The director made me ride the bike so many times!” She said as she broke into laughter.

Towards fellow actress Nam Ji Hyun, who takes on the role of a high school student who is a victim of family violence, Song Hye Gyo praises, “She is an amazing junior. I have heard much about her as an acting genius, and she really is one. From the first day we met, she called me ‘onni’ (older sister) affectionately. I thought I was at an age where she would call me ‘aunt.’”

She also revealed, “The filming set was so quiet, the atmosphere felt like a library reading room. For four months, I became rather close to the food truck ahjumma (lady who prepares food for staff at mobile filming locations). Her side dishes of sausages and fishcakes were the best, they reminded me of what I ate when I was young. Wherever we were, I ate her food well, and thanks to her, I never caught a cold during the filming.”

In the movie, Da Hye was a devoted Catholic. Song Hye Gyo elaborates, “After her fiance’s accident, she didn’t believe the world anymore, and lost her religion. When I was a kid, I used to go to church but I became distant sometime after that. Now I don’t have a religion.” When asked what she would say to Da Hye if they could meet, she took a long pause before answering.

“Well, I think I wouldn’t like to meet her. (laughs) I guess I would just say something short and polite before getting away from her. Da Hye and I both have pent-up, frustrated characters. Although I have become quite extroverted now, just a few years ago , I couldn’t even express 10% of what I felt inside me. I’m the type who literally ‘festers’ internally. I was recognized as a triple AAA blood type but I think I can be considered just an A blood type now. (laughs)”

Regarding her recent focus on her overseas career, she said, “I do not have ambitious plans such as going to Hollywood. I’m just trying to train myself through more overseas exposure.” She also explained how she had been in discussions with director Wong Kar Wai regarding future collaborations, much earlier before being cast in his upcoming movie “The Grand Master.”

When asked how she endures the gossip regarding her casting, she said, “I’ll have to leave it as it is. Initially I felt wronged and wanted to explain my stance towards every single news, but now, I’m not bothered by them. I also won’t regret over the past. Because regretting doesn’t change anything. Rather than that, I’m more worried whenever I see repeat broadcasts of my past dramas. A few days ago, I watched ‘Autumn In My Heart’ over cable TV. I was clenching my fists and kept asking myself, ‘At that time, why couldn’t I act any better than that?’ (laughs) What I fear most in the world is repeat broadcasts.”

Song Hye Gyo
Today (movie)
How does this article make you feel?