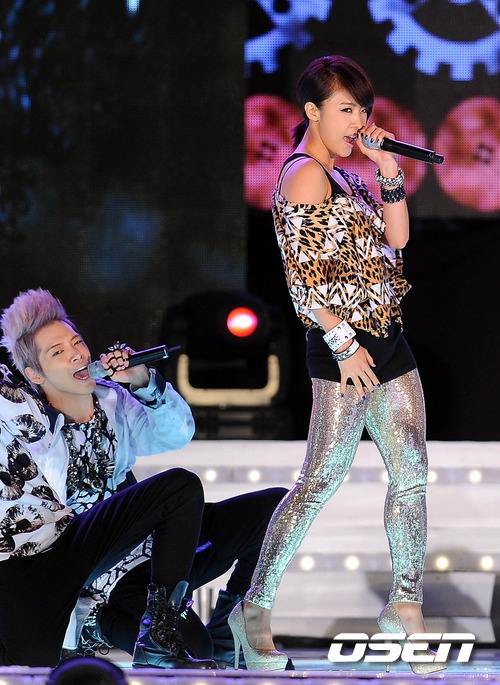 Actress Ha Ji Won was chosen to be one of the MCs for the “K-POP Super Concert,” held in Busan on October 28. She hosted the event with Kim Hyun Joong.

The rookie group AA, who is in the same agency as the actress debuted on this stage. During the group’s performance of “Because I Am Crazy,” Ha Ji Won, who had not limited her presence in the concert to hosting, made a surprise appearance.

Ha Ji Won had been active in the music industry earlier in 2003, when she released an album, “Homerun.” Her stage performance was her music-related comeback after eight years.

A representative of her and AA’s agency, Well Made Star M, stated the following, “This will be Ha Ji Won’s comeback after eight years. She decided to stand on this stage to support her juniors. She has been very dedicated, and has been regurlarly practicing the dance moves with AA’s Woosang.”

Besides Woosang, AA is made up of Aoora, Kimchi, Joowon and Ho-ik. Aside from “Because I Am Crazy,” the five-member rookie group also performed “Okebari” on the concert.

(See below for a fancam video of her performance)