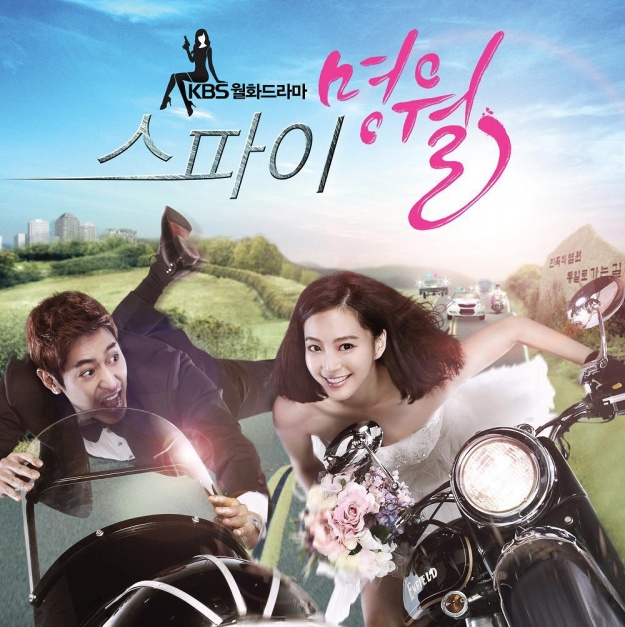 “Eric Mun” is back in the KBS romantic comedy “Spy Myung Wol.” Making his post-army comeback, the Shinhwa member plays a fastidious Korean Wave star, who gets mixed up with a cute, bumbling North Korean spy played by Han Ye Seul. She’s on a secret mission … to marry him!

Bobby Kim sings the drama soundtrack’s sultry title song “Afraid of Love,” and duets with Gilme for “To Love”. There are more heartrending ballads in store with Super Junior member Ryeowook‘s solo “If You Love Me More” and Lena Park‘s “More Than Anyone in the World.”

With Eric Mun playing a lead role and with music on the OST from Bobby Kim, Narsha from the Brown Eyed Girls, and even Ryeowook from Super Junior, I expected a lot from both. However, this is an album review, so I will only comment on the OST. (For now! Mwhahaha.)

The title track, as previously mention is “Afraid of Love,” by Bobby Kim. As you would expect from such a high caliber of singer as him, the title track is smooth, engaging, and you can just imagine a drama starting up, showing locations and dramatic shots with this crooning track over the top. The song is a very beautiful one but as soundtracks title songs go, I was expecting something with more kick.

Ryeowook’s solo song, “If You Love Me More” is a song I would strongly suggest if you are a fan of ballads. I don’t think I need to tell you how full of emotion his voice is, and he uses that strength to great effect for this soundtrack. This is a perfect ballad for the moment in the drama when you see two people either falling in love and you want to cry because of how moving it is.

(My tip: claim the room is dusty and the dust made your eye water!)

Lena Park‘s “More Than Anyone in the World,” is another song that is beautifully going to tug at your heart strings. Just accept this will happen. Her voice is soft and complimentary to the piano then her voice is powerful and complimentary to the orchestra. The song is a rollercoaster of feelings and one I found myself replaying. There is something captivating about a powerful female voice.

Overall the OST is sweet and attuned to the feeling of the drama. The problem is, you lose a little of that dramatic effect. If you’re a fan of ballads and soft songs to play while you relax, then this album is for you, however, if you’re looking for a drama OST with great variety and lots of power, you might want to look at Coffee Prince or Coffee House. I can’t say this album is a definite buy, so listen to a few of the songs first to see if it’s the album for you.

Bobby Kim
Lena Park
Narsha
Ryeowook
How does this article make you feel?