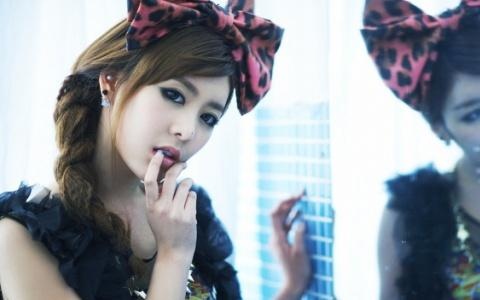 T-Ara’s Qri: "Just Came Back From a Casual Date"

T-Ara’s Qri has sparked rumors about whether she is currently in a relationship or not.

On November 1, Qri posted onto her Twitter account, “1. Eat ice-cream 2. Watch movie 3. Say our goodbyes in front of my dorm. Just like an ordinary date.” Along with the comment, she also attached a self-taken photo of herself, which gathered a lot of attention.

The photo shows Qri staring provocatively at the camera. But what also grabbed the netizens’ attention was her strong accentuated eye make-up.

Netizens showed various responses, such as, “Are you publicly dating now?” “Wow, you must really have a boyfriend…” “No wonder you’ve gotten prettier.” “Your make-up is slowly turning into Kya-ru (Japanese) style make-up.” “I think you would look better if you went softer on the eye make-up.”

However, below the photo that she had linked, she also added the comment, “This person kept dosing off while watching the movie. It kind of reminded me of myself back in the day. Watching you like that makes me laugh Hye In.” We can see that the person’s name who went on the “date” with Qri was Hye In. However, just with the name it was hard to tell if it was a boy or girl.

In response to this, netizens commented, “Qri, is the name of the doll on your shoulder called Hye In?” “Did you watch the movie with Lee Hye In from ‘Rollercoaster?’” Most of the responses were regarding that person, and if it was her boyfriend or not.

With all the media reporting on Qri’s “dating” scandal, Qri’s agency, Core Contents Media, revealed through a phone interview with E-Daily Star, “The person with the name Hye In is a childhood friend of Qri’s, and that friend is a girl. If media had called in to confirm if these rumors were true from the beginning, then this situation wouldn’t have gotten out of hand.”

Core Contents Media
Qri
T-ara
How does this article make you feel?