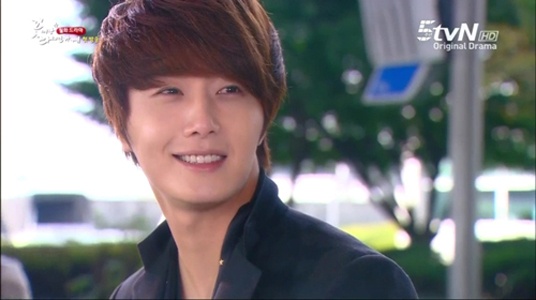 Cable drama “Flower Boy Ramyun Shop” (FBRS) aired its first episode on Oct 31, scoring a respectable 1.19% in ratings of households with tvN, Mnet, Olive and OnStyle cable channels, according to AGB Nielsen Research. Analysis of the ratings also revealed that it as the top drama for female viewers aged between 20 to 30. This age group also constitute 30% of viewers when the ratings of the episode peaked at 2.6%. As ratings for cable programs, these figures mark a promising start for the drama.

A tvN spokesman commented that the record ratings could be achieved due to three reasons – vivid, lifelike characters; a storyline filled with both realistic and fantasy elements; and filmed with stylish on-screen beauty. He also likened the drama as a “romantic comedy assorted gift set” for viewers.

With a setting against an instant noodle “ramyun” shop, the first episode showed the first meeting between lead characters Cha Chi Soo (Jung Il Woo) and Yang Eun Bi (Lee Chung Ah). If the drama was an “assorted gift set,” one of the most coveted gifts must be Jung Il Woo. Even prior to the first episode broadcast, he has attracted much attention for his portrayal of a cunning, harsh rich man’s son who is innocent at heart, earning him the nickname of “New Age RoCo Prince.” (“RoCo” is short for “Romantic Comedy”)

Unanimous praise from netizens include, “Who else but our Actor Jung, he really lived up to our expectations,” “Birth of the new generation RoCo King! Today’s episode was really interesting. I’m already smitten with Cha Chi Soo,” “This seems like a drama gently simmering to becoming a hit! Even if only the first episode has just been aired, I don’t think I can sleep, all because of Il Woo!”

The drama airs every Monday and Tuesday at 11pm on tvN.