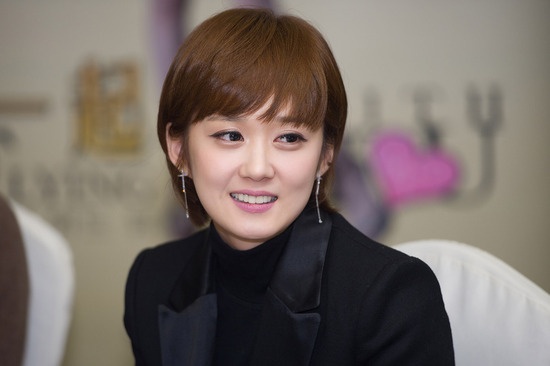 During the first half of this year we saw her in the successful KBS drama “Baby Faced Beauty” that received a good response together with a good viewer rating. This time Jang Nara has been selected as main character in a Chinese movie, after 8 years of activities in China. She said “[After ‘Baby Faced Beauty’] I worried less. Now I have the courage to pick various roles. As long as I become older I like trying new stuff.”

On October 30, after the official presentation for the movie “Flying With You” in Beijing, Jang Nara released an interview talking about the good response received through the drama “Baby Faced Beauty,” her loneliness during her stay in China and about herself. “Flying With You,” with Taiwanese movie star and singer Jimmy Lim and a production cost of approximately 600,000 dollars, it is the story about a young lady (Jang Nara) from a rich family who met the love of her life (Jimmy Lim) two days before her wedding of money convenience with another guy.

Talking about her life in China, she confessed that during a shooting for a new drama she needs more effort concentrating as she has to learn the whole script since they shoot scenes randomly in the same place. However, she confessed she had more a personal problem and how much her China activities were hard for her, she said “The toughest moments during my eight year long career in China were when I came back home after shooting and doing nothing. That time I did not know it was hard because I felt lonely. It was the same pattern every day. Looking at the script, drinking a cola everyday.” She added, “I realized it is not good for me to stay alone. Whenever I am free or not I try to go out. Even just for a cup of coffee.”

When asked, “Do you have any plans for marriage?” Jang Nara answered she really put herself in a relationship in the past, but it is very hard to lead a relationship to a marriage. She said smiling “I used to envy married couples. But now it is very hard for me to even be a couple. Sometimes I even doubt two people can really love each other.”

In the movie, Jang Nara’s character is only 23 years old and she seems to be following the characteristics of her previous role. “When I lightly make up I look younger. But you should see me right after I wake up, I look older than I am. But since it is not a documentary, there is no need to match the exact age.”

She was very pleased to receive good critics about her drama in Korea, “Baby Faced Beauty,” because during the shooting she was very worried about viewers’ response. She said, “I was worried to appear like a person with lack of confidence since I am a person with a lot of experience. Every time I was acting I felt so anxious. Anyway I was so relieved after the unexpectedly good response. I can say it made me more greedy.”

In the future she said she would like to try new roles, but she confessed she would like to do a more “femme fatale” character, a woman with strong influence in men, or like Go Hyun Jung in MBC drama “Hit”. Jang Nara after promotion for her new movie in China will come back in Korea to consider a new project to start. Look forward to see her in a new amazing role!

Jang Nara
Flying With You
Go Hyun Jung
How does this article make you feel?