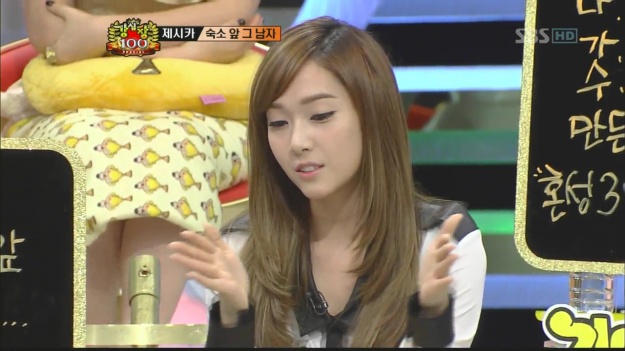 On SBS “Strong Heart” that was broadcast on November 1, SNSD’s Jessica spoke about meeting a stalker. Jessica stated, “Late at night I was riding a taxi and got off in front of our dormitory but a man was waiting and holding an umbrella.”

She continued the scary story, “I clicked on the password and went into my dorm’s building. The elevator takes a while so I went towards the stairs but I had a funny feeling. I looked back down and the man’s umbrella was stuck between the automatic doors.”

“He came into the door and I was so surprised I began to run up the stairs, I could hear him following behind. As I ran up faster, his speed would go up as well. With shaky hands I quickly pressed the password and went inside. The stranger was trying to get in.”

“I didn’t know then but my friends had seen the man and were calling me because they were worried. My friends were outside and began to call for me, the stranger opened his umbrella and quietly left.”

Jessica was asked if she had seen a guy like that before, she answered, “I have never seen the guy but other SNSD members said that they had seen a man in a suit with an umbrella the day before.”

Lee Teuk and Boom guessed correctly whether the guy was a celebrity or not. Jessica replied in the affirmative.

What do you think? Do you think Lee Teuk and Boom were leading Jessica to answer in that way because of the recent rumors with 2PM’s Taecyeon?

jbarky is a senior editor for soompi.com. (Also the BEST) You can email him at barkjason@soompi.com, orfollow his twitter.com feed at @jjbarky
Super Junior
2PM
Boom
Jessica
Strong Heart
How does this article make you feel?