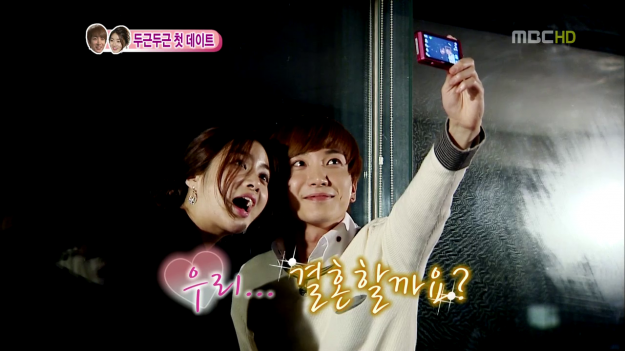 Jang Woo♡Eun Jung : Dancing with her mother in law.

The couple bought medicinal items and went for a session of couple yoga so that they can become a healthy couple. They decide to take their personally made medicinal tea to each of their parents but Jang Woo proposes that they immediately go and give it to their mothers today. What is Eun Jung’s response to this? While at it, they decide to invite her mother-in-law to their house and serve her a meal. What will lunch menu be that the couple thought would be perfectly matched to her mother-in-law?

Last week, when they were having their house warming party with friends, So Hyun’s true feelings about marriage were revealed due to the lie detector, what were her feelings? A few days later So-Won Couple is taking a much needed break. So Hyun, who is one of the youngest looking celebrities of her age, has prepared a perfect “Meal for looking young.” What is this meal like and what was So Hyun doing that caused hearts to fly out of Won Joon’s eyes?

The young looking couple Won Joon and So Hyun have skins that seem to not age. Won Joon reveals his face with no makeup and the couple also reveals their method for looking young. So Hyun also prepares a special massage to protect Won Joon’s skin from seasonal changes. The couples’ ways of keeping young will all be revealed.

Lee Teuk♡Sora: The king of helping his wife

Husband Teuk decides to visit Wife Sora’s drama recording set. He calls around to his friends and gets a list of special methods of helping his wife, what is this list about? Lee Teuk prepares a special and secret present for the staff at the drama recording set however even before he gets a chance to meet Sora, he gets chased away from the recording set, why was he chased away?

Kang So Ra
Kim Won Joon
Lee Jang Woo
Park So Hyun
We Got Married
How does this article make you feel?