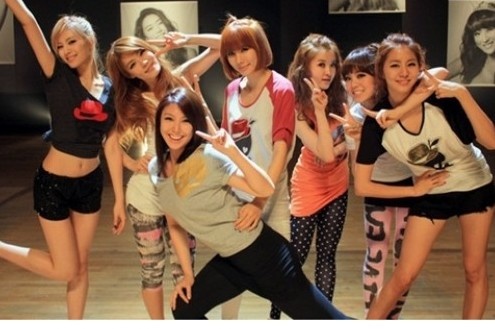 Girl group After School’s costumes for Japan are the topic of conversation amongst netizens.

Recently the album jacket for After School’s second single album for Japan, “Diva,” was uploaded on an online community.

According to the revealed jacket photos on the official Japanese homepage, the eight members show off their perfect bodies. They are wearing tight leather tops to emphasize volume and wearing pink lace skirts with black strings to create multiple “X’s” on their legs.

However, not only are their upper bodies are exaggerated for volume and thinness, but also their legs as well. They are slimmer and elongated than usual to come to the extent that their already great bodies have been amplified.

Also, their clothing concept is very different from the sporty apparel they wore when promoting the Korean version of the song.

Netizens who saw the photos reacted with diverse responses: “Why would they use Photoshop when their bodies are already great? It is actually burdening,” “How can Diva just change like that?”, and “They are animation characters.”

Meanwhile, After School will perform at Tokyo, Japan for “Girls’ Award 2011” on November 12.

Here is one of their performances of the Korean version of Diva, from back in 2009.

After School
controversy
Diva
photoshop
How does this article make you feel?