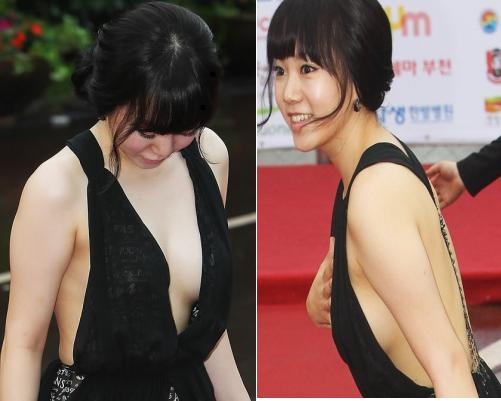 What is a good way for rookie or unknown actresses to gain attention? Simple. It is to reveal skin. It’s one of the most oldest and effective ways to be known in a short period of time. However, there is the crucial aftermath that cannot easily go away.

Recently, many actresses are being brought up in online portal sites due to their outfits at award shows and film festivals. Some actresses really do rise to stardom because of a single outfit. However, as soon as they get famous, the actresses say things like “It’s uncomfortable for me when people focus on the skin exposure,” “I want to be known for my acting skills rather than my appearance,” “I don’t like how I became stuck with one image after I wore that certain dress,” and so on.

Let’s talk about Lee Chae Young. Since the “Blue Dragon Film Festival” and the “Seoul Drama Awards,” Lee Chae Young has appeared on many portal sites for her provocative dresses. People then continued to use search keywords such as, “Lee Chae Young’s bikini” or “Lee Chae Young’s skin exposure.” However, after those photos were released, Lee Chae Young expressed uncomfortable feelings and embarrassment over the heightened attention over her exposed skin.

The same goes for Jeon Sae Hong. She probably wanted to be just as beautiful as the next actress on the red carpet but due to her overly revealing dress, she received much stress over her fixed image of provocativity. In her movie “The Beast,” she was once again labeled with a sexy image, which can be seen as a compliment. However, she confessed that she would like to shed the sexy image that people put on her.

It’s natural for an actress or actor to want to have multiple faces and show multiple sides of their acting skills to the viewers. But being stuck with one image is a big obstacle that prevents them from having a variety of faces.

Kim So Yeon, who is famous for her charismatic charm, had an absence of three years from the entertainment world. However, she had a successful comeback with, of course, a very revealing dress.

Go Eun Ah also rose to interest at the “Icheon Chunsa Film Festival” with her revealing black dress, making her receive the nickname of “little Kim Hye Soo.” Kwak Ji Min’s dress was also under the light for exposure.

Most recently at the “Busan International Film Festival,” Oh In Hye’s dress rapidly became a hot issue. She beat all the top stars who attended the event that night and became the number one searched keyword. There were many negative comments from the netizens over her dress. During an interview, she confessed, “I didn’t choose that dress with bad intentions but when people started to have negative views about it, I cried alone in my room for hours.”

Therefore, provocative exposure may make one an overnight star but there is that much more of a burden that needs to be taken care of afterwards. Perhaps they need to think of other ways to express their beauty and to give off their aura as an actress. With the ever-increasing eye of the netizens, it is especially important to be wise about how you look to the public eye.

What are your thoughts on stars’ overexposure to skin?