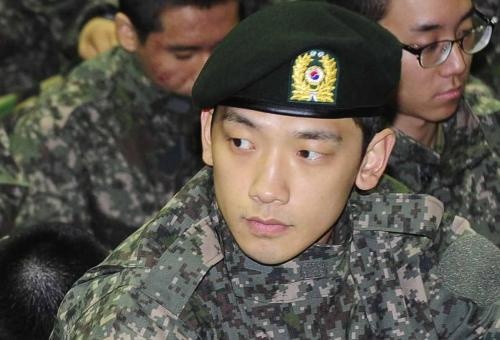 [Update] Rain an Expert in Shooting: A Hidden Sniper?

According to tvReport, Rain has been selected to become the assistant instructor for Division 5 in the Recruit Training Center.

Due to his excellent shooting skills, he was chosen to become the assistant instructor for his division.

After beginning his training on October 11 in Division 5, Rain will finish his time at the training center on November 18. After that he will go through executive education from the Second Recruit Training Center, then will officially start his military service on December 9.

On October 11, Rain joined the army as an active-duty soldier and now is being loved for his expertise in shooting.

According to the report submitted on November 6 by the National Assembly Defense Committee, Rain hit the bulls eye 19 out of 20 during daytime training and 10 out of 10 shots during nighttime training on October 26, achieving a hundred percent in shooting.

In order to pass, a soldier-in-training needs to have an accuracy of 60% or higher. With daytime training, 18 shots out of 20 or higher, and in nighttime training, 9 out of 10 bulls eye hit is considered a perfect score. Along with passing his first time, he is now entitled an “Expert.”

Out of 140 soldiers-in-training, 98 passed with 60% or higher accuracy. Among those who passed, Rain was in the Top 3. On November 14, Rain is to finish his training at the Training Center. Even though he is not even out of his training period, he is already wanted by the Air Force and the Marines.

Army
Rain
How does this article make you feel?