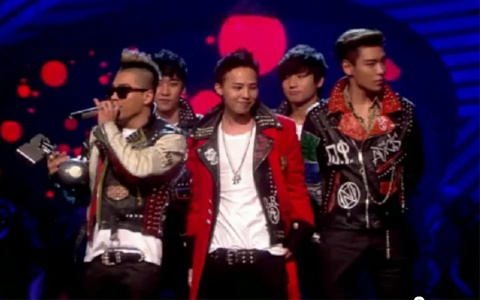 After weeks of fan voting, Big Bang has been announced the winner of the “World Wide Act” Award at MTV’s European Music Awards. The event was held today in Belfast in Northern Ireland. Congratulations to them as this is another huge step in bringing K-Pop to the Worldwide Market.

As another treat, all five members of the group were present to receive the award as well.

For their acceptance speech, G-Dragon spoke in Korean followed by Taeyang speaking in English, “This is only because of our fans, through our ups and downs. Thank you for standing by us.”

Check out the video of the announcemnt and recieving the award.

After winning the Asia Pacific Category last month, they were up against many popular acts from around the world for this award. They include Lena representing Europe, Abdelfattah Grini representing Africa/India/Middle East, Britney Spears representing North America and Restart representing Latin America.