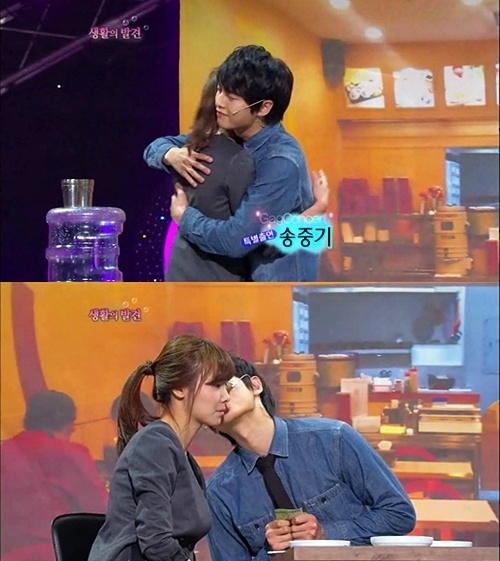 Song Joong Ki melted the hearts of the female audience with his cute charm at the KBS “Gag Concert.”

On the episode of “Gag Concert” that aired on November 6, Song Joong Ki made a surprise guest appearance on one of the corners, “The Discovery of Life,” and shook the hearts of the female audience.

He played Shin Bo Ra’s younger boyfriend as they shared hugs and kisses. The scene was set up as an encounter between her new boyfriend and ex-boyfriend. You could hear the female audience, very loudly scream every time Song Joong Ki would make one of those cute gestures.

Song Joong Ki was a sight for sore eyes as he blasted his cute act by whining that he couldn’t eat a particular dish. He said he couldn’t eat Kimbap because it had carrot in it. He also asked to cool his tongue by putting a piece of radish on because he burnt it after drinking hot water.

Other celebrities who guest-starred in this episode of “Gag Concert” are Kim Wan Sun and Kan Mi Youn.

Check out the clip of Song Joong Ki from “The Discovery of Life” below:

Song Joong Ki
Gag Concert
How does this article make you feel?