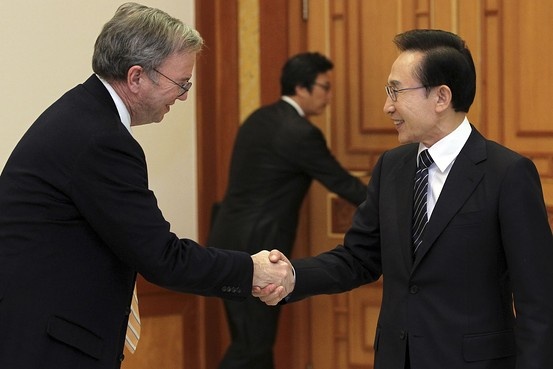 Google Has Plans to Create a K-Pop Channel

Recent historic events has brought K-Pop to the worldwide stage through the recent SMTOWN performances in Paris, NYC, and London as well as BigBang’s recent, surprising overseas victory at the MTV EMA’s. As the scope of K-Pop continues to grow it seems everyone is attempting to capitalize on it.

News coming out today reveals that Google has plans to create a K-Pop channel amongst other things. An article written by the Wall Street Journal reveals some interesting rumors surrounding Google and the company’s interest in Korean media. The article also gives a nice shout-out to K-Pop group SNSD and their recent American promotions.

Google’s Executive Chairman, Eric Schmidt has made the long trip over to South Korea where, over the next few days, he plans to meet up with several other executives from major IT companies. His first stop was to speak with President Lee Myung Bak to discuss a team-up with Google and Korean IT firms.

One of Mr. Schmidt’s forthcoming ideas is for Google to create a YouTube channel that will be devoted solely to K-Pop. Much of K-Pop’s international success comes in part thanks to YouTube. Also, K-Pop videos were recently spotted being highlighted on YouTube’s front page, further bringing attention to the increasingly popular genre to newcomers.

On Tuesday, Mr. Schmidt is scheduled to hold a press conference where there is speculation he will reveal other big Korean related deals. As well as rumors of a large investment on Google’s part as the company could possibly be purchasing Korean mobile search engine Daum. This merger would still put Google behind NHN Corporation’s own popular mobile search Naver, which currently makes up more than half of the market.

So what are your thoughts on this development? Will the interest of Google further aid in K-Pop’s global advancements?

Daum
Google
Naver
YouTube
How does this article make you feel?