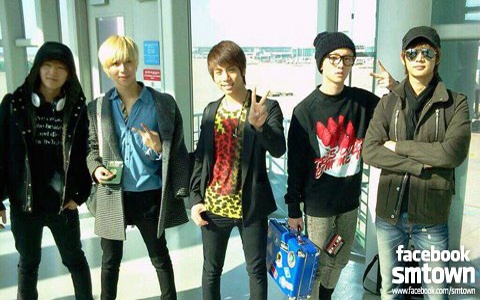 It has been a busy few months for popular group SHINee. Between their Japanese promotions as well as helping to expand K-Pop worldwide through SMTOWN, the SHINing Idols have been going non-stop. Last month, it was announced that SHINee would release their first full-length Japanese album, appropriately titled, “THE FIRST”, in late November. A few days later another announcement was made regarding the album, stating that the release date was postponed until December. Sometime has passed since the news was made public and today, finally, the track-list has been revealed.

The album will consist of twelve songs. Fans shouldn’t be too surprised to find the group’s previous Japanese single releases: “Lucifer”, “Juliette”, “Replay”, “Love Like Oxygen”, and “Hello” to be amongst the twelve songs. The rest of the list is made up of seven new tracks including the Japanese version of fan favorites: “The SHINee World” and “Amigo”.

There will be three versions of the album avalible for fans to choose from: a regular, limited edition, and limited box edition. The regular edition will include the theme, “Stranger” from drama, “Stranger6” as a bonus thirteenth track. Mark your calendars as the album is scheduled to be released on December 7.

SHINee
THE FIRST
How does this article make you feel?